Frontrunner Stakes Springboard for Breeders’ Cup and Kentucky Derby: The Frontrunner (G1) have been a worthy prep race for the Kentucky Derby, and for careers of amazing racehorses since its inception in 1976, when it was known as the Norfolk Stakes. The Frontrunner has seen some very good thoroughbreds enter its winner circle through the years. Lookin at Lucky won the Frontrunner in 2009, while other graded stakes winners such as Stormello (2006), Dixie Union (1999), Free House (1996), Bertrando (1991), and Best Pal (1990), have all used the Frontrunner as their preview of better things to come from them! Could another super star be in the 2014 Frontrunner field? (see 2014 odds below) 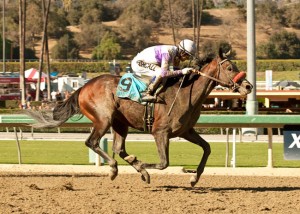 Bond Holder and jockey Mario Gutierrez, pictured above, won the 2013 Frontrunner Stakes at Santa Anita Park and went on to the 2013 Breeders’ Cup Juvenile where the duo finished in 4th place. Sadly, Bond Holder lost his battle with laminitis earlier this year. Team Lady and The Track encourages fans to donate winnings this weekend to laminitis research at grayson-jockeyclub.org.
Photo: Benoit Photo

This year’s Frontrunner field will line up on Saturday, September 27 at the great race place, Santa Anita Park. The new dirt should be interesting to see, especially with some of these horses trying dirt or two turns for the first time. There are some stakes winners in this field. Daddy D T, by Scat Daddy, broke his maiden in the Oak Tree Juvenile Turf Stakes last month, at the 1-mile distance. Scat Daddy has proven to be a very good turf and synthetics sire. I understand the switch to dirt, trying to earn some early Kentucky Derby points, but this horse has shown that he likes the turf. If he goes unplaced here, expect a switch back to turf. American Pharoah broke his maiden in the grade one Del Mar Futurity, leading every step of the way over the synthetics. The race was his second start, and only around one turn. Baffert instructed jockey Victor Espinoza to get him to the lead. Baffert seems to think the only way American Pharoah will run his race is if he is on the lead. The Pioneerof the Nile ridgling seems to be one dimensional, so far. This will be his first race around two turns as well. Skyway is the other graded stakes winner in the field. He won the grade two Best Pal stakes at 6 ½ furlongs. This Sky Mesa colt is one of the more experienced in the field, which will be making his fifth start here. He broke his maiden at 4 ½ furlongs in a maiden special weight. The colt is likely to like the shorter distances though, as he is out of a Dr. Blum mare, which carried on the Dr. Fager line. The colt is working awesome at Santa Anita though. His last recorded work was 5F in :59.6. He is primed to pounce, if he can make the 8.5F distance.

What about the rest of the field? Let’s start with Calculator. He was second in the G1 Del Mar Futurity. Although he was clearly second best to American Pharaoh, he was also 8 ½ lengths better than the third place horse. Calculator is the only maiden in the race, but he is likely to be one of the top betting choices in the race. He is working very well at the San Luis Ray Training Center, last recording a 6F work in 1:13 flat. He is also trying two turns for the first time, which may be exactly what he needs. Texas Red is an Afleet Alex colt who has the ability to get the 8.5F that the Frontrunner demands. He broke his maiden going a mile at Del Mar in his third start. He doesn’t seem to be the best workhorse though, as all his works are not anything to brag about. He may be better on the turf, as his distaff side is heavy in turf influence. Lord Nelson is the exact opposite of Texas Red. Lord Nelson is by the late Pulpit, out of a Seeking the Gold mare. Lord Nelson should love the distance here. He is also working like a monster over the Santa Anita track. He broke his maiden at Del Mar going 5F and should get better with age and distance.

Any horse in this race could take the G1 Frontrunner, but the mane threats are likely to be the graded stakes winners, American Pharoah, Skyway, and Daddy D T. Whoever does take the G1 Frontrunner will earn 10 points and a place in the running for the 2015 Kentucky Derby. The second place finisher will receive 4 points; third place will receive 2 points, and fourth will receive 1 point. The Frontrunner is also a “win and you’re in” race for the Breeders’ Cup Juvenile. These horses are running for more than Kentucky Derby points, but for a guaranteed spot in the Santa Anita starting gate on November 1.

The 2014 Jockey Club Gold Cup is a Handicappers Nightmare