Peace and War heads to 2014 Breeders’ Cup Juvenile Fillies: Peace and War and jockey Julien Leparoux won the 63rd edition of the G1 Darley Alcibiades at Keeneland on Friday, October 3, 2014 for trainer Olly Stevens. The victory not only awarded the team with a $400,000 purse, but an automatic entry into the Breeders’ Cup Juvenile Fillies on Saturday, November 1, 2014 at Santa Anita Park. 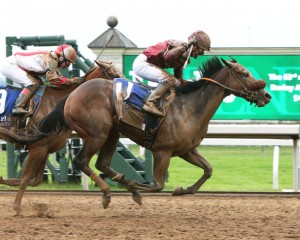 Trainer Olly Stevens made it clear that even though the details aren’t finalized yet, Peace and War will make her way to California saying, “Going on to the Breeders’ Cup is very much in the plans. We just don’t have the details in place yet.”

Olly Stevens didn’t seem too impressed with the 2014 Darley Alcibiades field reporting, “She had a really tough trip, but she’s always been a brave filly. I was very comfortable to have her in the rear (early), and when I saw how fast they were going, I was delighted.”

Olly Stevens added that Peace and War has been around a bit in her young career saying, “We purchased her at Keeneland (at the September Yearling Sale) then took her back to England. She won her first out then we caught some bad ground at Ascot in England, which is one of the main reasons we came over here. She’s been back 12 days. Julien (Leparoux) breezed her here on Sunday, the day I flew in, and he really liked her. He jumped off another filly to ride her, actually.”

Filly jumper Julien Leparoux reported, “She broke slow, but they were going fast in front of us, and that helped. I had breezed her before this race, and she handled the dirt fine. She was always traveling on the bridle. I knew as soon as I got her some room, she would have a nice kick because that’s what she had done in the morning. She’s very nice, very relaxed and nothing seems to bother her. They brought her here to give her a test on dirt. Now the big test will come at Santa Anita.”

Peace and War covered the Darley Alcibiades 1 1/16 mile track in 1:44.86 just finishing first in front of Top Decile by only a half-length. 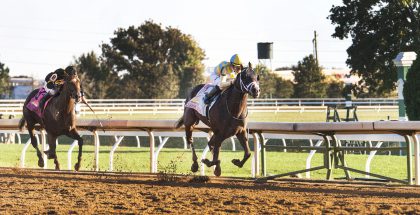 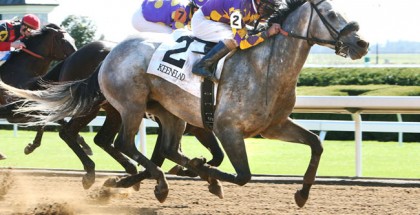