Daredevil wins Champagne and heads to Breeders’ Cup Juvenile (NYRA Press Release): Favored Daredevil came from off the pace to take command at the top of the stretch and went on to post a dominating 2 ½-length victory over Upstart in the 143rd running of the Grade 1, $500,000 Champagne on Saturday at Belmont Park. 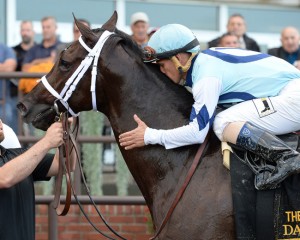 It was the second win in as many starts for Daredevil, who with the victory earned an all-fees paid berth in the Breeders’ Cup Juvenile on November 1 at Santa Anita Park as part of the “Win and You’re In” Breeders’ Cup series.

Ridden by Javier Castellano, the chestnut son of More Than Ready bumped with The Truth Or Else coming out of the gate, and then settled in second, well off the rail, as Holy Boss took the field of six juveniles through an opening quarter-mile in 22.97 seconds, with the half going in 46.22. Revving up on the turn, Daredevil stormed through along the inside and hit the stretch three lengths in front and maintained his advantage to the wire without being asked.

“He’s a special horse,” said Castellano, aboard the Let’s Go Stable color-bearer for the first time. “I worked him last weekend and he was very impressive the way he did it. He didn’t do anything much today; he just galloped along. The one thing I told Todd just now is that he reminded me of Bernardini when he won the Jim Dandy. He just splashed along today; he liked the track. He’ll do whatever you ask him to.”

Daredevil’s winning time for the mile was 1:36.62 over the sloppy track as he gave trainer Todd Pletcher his fourth Champagne victory in the past five years and sixth overall.

“I thought it was very impressive,” said Pletcher, who also won the Champagne with Havana (2013), Shanghai Bobby (2012), Uncle Mo (2010), Scat Daddy (2006) and Proud Accolade (2004). “He rated kindly and did everything you would hope one would do. He finished really well and I couldn’t be more pleased. His training for us has been really impressive in the mornings.”

Daredevil’s win came three weeks after his front-running victory on September 13 over a similarly wet track at Belmont.

“We’d never breezed him on an off track, so I was a little concerned running him the first time, but we felt pedigree-wise he would handle it, and he obviously does,” said Pletcher. “He trains like a good horse on fast dirt, too.”

Upstart, who put in a sustained run to gain second, was 12 ¾ lengths in front of The Truth Or Else. El Kabeir checked in fourth, with Holy Boss and I Spent It completing the order of finish.

Long shot By the Moon wins Frizette and Pays Big