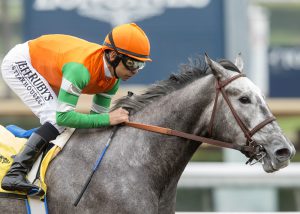 Las Virgenes Stakes (GII) at Santa Anita. The gray, Pennsylvania-bred daughter of Tapit, though Triple Crown nominated, will more than likely remain on the path toward wearing the blanket of lilies and not face the boys despite her impressive victories, according to her Hall of Fame trainer.