Home » Horses We Love » The Adventures of Canonero II, Part 2 – From Caracas to Louisville 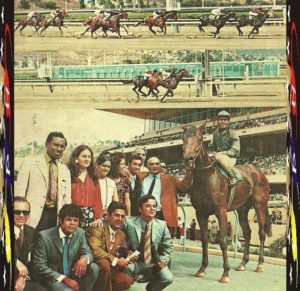 The trip from Caracas, Venezuela to Louisville, Kentucky, was not the first travel back to the United States for Canonero II. After a successful debut as a two-year-old at La Rinconada Racetrack on Aug. 8, 1970, the bay colt was sent to Del Mar in California to participate in the Futurity, a race he was nominated to. He was first entered in an allowance race on Sept. 5, 1970 and finished a close third. Seven days later, he ran in the Del Mar Futurity, finishing fifth of nine competitors. Even though he didn’t win, Canonero II was not a total disappointment.

The son of Pretendre was sent back to Caracas.

He raced a total of nine more times, with five wins (one over a mile and a quarter) and three thirds. His only participation in a stakes race in Venezuela resulted in a dismal effort, as he finished last of 11 in Clasico Gobernador del Distrito Federal. With six wins in twelve starts, owner Pedro Baptista decided to… (more)