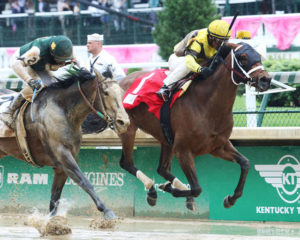 LOUISVILLE, Ky. (Friday, May 5, 2017) – Shortleaf Stable’s Benner Island held off the fast-closing Union Strike by a head and survived a rider’s objection to win the 62nd running of the $200,000 Eight Belles presented by Kentucky Trailer (GII) for 3-year-old fillies.

Trained by Brad Cox and ridden by Javier Castellano, Benner Island covered the seven furlongs on a sloppy track in 1:24.28. The victory gave the Cox-Castellano duo back-to-back stakes triumphs Friday to go with Green Mask’s victory in the Twin Spires Turf Sprint (GIII).

Benner Island established an early lead and maintained a daylight advantage in the run down the backside. She maintained her advantage to the stretch, where she repulsed one challenge from Golden Mischief and then the final surge from Union Strike.

The victory was worth $112,840 and increased Benner Island’s earnings to $235,863 with a record of 8-3-2-0. Benner Island is a Kentucky-bred daughter of Speightstown out of the Awesome Again mare Spacy Tracy.

Golden Mischief was another 2 ¼ lengths back in fourth and was followed in order by Pretty City Dancer, Gris Gris, China Grove, Cajun Delta Dawn, Let It Ride Mom, Florida Fabulous, Ghalia, What What What, Lovely Bernadette andI’mluckysgirl.

Javier Castellano (rider of Benner Island, winner) – “The track is a little speed favoring and I used my horse a little bit early to put her in a good position, especially considering the race was seven-eighths (of a mile). She fought very hard down the stretch and I know once I was past the wire that I was confident she stayed in her path.”

Brad Cox (trainer of Benner Island, winner) – “She was taking Javier (Castellano) up the backside and when I saw the 22 and change (for the first quarter-mile) I didn’t mind that, but when I saw 45 and change (for the half-mile) I didn’t like that. But, honestly, turning for home I thought she would back up on the fractions. Knowing the filly, I knew she would fight and was fit. She’s running back on three weeks and had two solid works since. It was a big effort and a great job. The Acorn (GI on June 10 at Belmont Park) would be ideal for her next, but we’ll let her tell us. Hopefully Javier can stay on her. She hasn’t had a tough campaign, but she’s been running steady for three months, so we’ll see how she comes out. I think one turn is what she is best at and I think she proved that when she flattened in the Fantasy (GIII) after ranging up.”

“This is awesome. Growing up two blocks outside the back gate, this is my home. I don’t know if it’s hit me yet. Green Mask showed up today and finally got it done and then this filly. We expected her to run big today.”

Brice Blanc (rider of Union Strike, runner-up) – “I don’t understand why they didn’t take her (Benner Island) down. She broke my momentum twice. We were inside the three-sixteenths pole and I got up in the hole – I was in there. And she shut me off. I broke a little slow, but my filly put me right in the race. First time in the mud for her and she ran terrific. A good race for her for sure.”