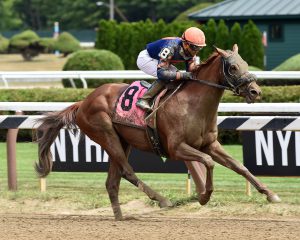 Mind Your Biscuits is the most proven colt entering the historic Malibu Stakes (GI), but winning will be no easy task with eight other horses in the race, including a trio of talented runners from the barn of Bob Baffert.

A New York-bred by Posse, Mind Your Biscuits is owned by J Stables, Head of Plains Partners LLC, and Summers et al. and is trained by Robert Falcone Jr. Having run strictly in state-bred company through his first eight starts, Mind Your Biscuits won his first start in open company with a fast-finishing 1 ¼ length tally in the Amsterdam Stakes (GII) at Saratoga. He has not won since, but in his most recent start he was third, just a head away from second, in the November 5 Breeders’ Cup Sprint (GI) over the Santa Anita main track.

Hall-of-Famer Bob Baffert has three runners in the race, all for different owners. Ten Blessings, owned by Patti and Hal Earnhardt, is likely to be the shortest-priced of Baffert’s three. A son of Smart Strike and the champion mare Indian Blessings, Ten Blessings has only raced four times, but both of his wins came over Santa Anita’s main track, the most recent being in allowance company at the same distance as the Malibu. The most recognizable of Baffert ’s trio is the Michael Lund Peterson-owned Mor Spirit, who will be making his first start since a 10th-place finish in the Kentucky Derby (GI). The Eskendereya colt has never won going shorter than a mile. Rounding out the Baffert trio is Zayat Stables LLC’s speedy colt Jazzy Times. Always held in high regard, Jazzy Times once took up residence in Triple Crown winner American Pharoah’s stall. His speed has also led him to some distinguishable distance limitations which may be well-suited to the seven furlongs he’s set to run in the Malibu. 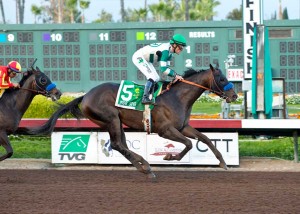 A pair of graded stakes-winning colts have shipped in from the East Coast, Sharp Azteca and Awesome Banner. Owned by Jacks or Better Farm Inc., Awesome Banner has crossed the wire first in four of six starts since being switched to trainer Mark Casse in March. In his most recent effort in the Steel Valley Sprint, the speedy bay finished two lengths clear of the runner-up but was disqualified and placed second. Gelfenstein Farm’s Sharp Azteca will be making his first start at the top level for Jorge Navarro and is the only horse in the field with two graded stakes victories. He enters the race off of a 5 ¼-length score in the City of Laurel Stakes.

Grade 2-placed Semper Fortis and allowance winners Horse Greedy and Who’s Out round out the field.

The Malibu is run at 7-furlongs and will go as the eighth race on the program at 3:31 pm PT.