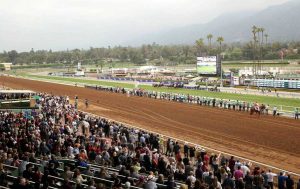 The list of La Brea (GI) winners is as talented as it is long and although this year’s edition has drawn no current stars, it looks like a race that could very well produce one. The field is headlined by Lightstream and Finley’sluckycharm, two impressive fillies shipping in from Kentucky and both coming off of sharp victories.

Lightstream, owned by Head of Plains Partners LLC and Little Red Feather Racing et al., boasts the title of being the lone graded stakes victor in the field with a pair of wins in graded company at Keeneland, as well as a listed win on the turf at Belmont Park. Trained by Brian Lynch, the Harlan’s Holiday filly will be well-rested having not run in the nine weeks since capturing the Lexus Raven Run (GII) in mid-October. That amount of rest has worked well for her before with her start before the Raven Run having been 11 weeks prior.

Though she has no graded stakes wins to her name so far, Finley’sluckycharm does have the highest speed figures in the field and has won five of six starts by a combined 24 ½ lengths. The Twirling Candy filly is coming into the race off of a powerful 8 ½-length romp in the Dream Supreme Stakes at Churchill Downs, covering the six furlongs in a sizzling 1:08 ⅗. Trained by Bret Calhoun and owned by Carl R. Moore Management LLC, all of her victories have come on the front end, which could prove to be her downfall should she engage in a torrid early speed duel.

The final three stakes winners in the field are Constellation, Chao Chom and Enola Gray.

Owned by LNJ Foxwoods and trained by Jerry Hollendorfer, Constellation has won three of her last four by a combined 23 ½ lengths. S Samdow Inc.’s Chao Chom has never raced outside of California-bred company, but she seemed to put it all together in her most recent start when trainer Gary Stute put Kent Desormeaux in the irons. Enola Gray, who is trained by Phil D’Amato, won her first three starts by a combined 26 ¼ lengths but has lost two of her last three, one of which being her only start in open company. Enola Gray is owned by Nick Alexander.

Rounding out the field are Perfect Pic, a grade 3-placed filly trained by James Cassidy and owned by DP Racing. Coniah is a multiple graded stakes-placed filly who returns to the barn of Carla Gaines for James and Tammy McKenney after having three trainers since her last start for Gaines. Lunar Empress, who will be making her stakes debut for trainer Richard Baltas and owners Jaam Racing Inc and Riley Racing Stable, will also be in the hunt for a first graded victory in her first stakes attempt.

The La Brea is carded as the seventh race on Santa Anita’s Opening Day card with a scheduled post time of 3:01 pm PT.