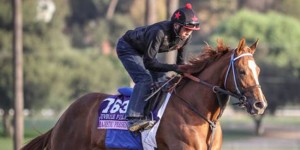 If Majestic Presence makes it to the Kentucky Oaks, she could easily be a threat, as she has a pedigree gears toward distance and class.
Photo: Breeders’ Cup Photo ©

Majestic Presence is a nicely bred filly, purchased at the 2013 Keeneland September Sale for $100,000. Sired by the son of A.P. Indy, Majestic Warrior, the filly is loaded with stamina throughout her pedigree. Majestic Warrior won his first two starts, which included the G1 Hopeful Stakes at 7F, but failed to hit the board in five starts afterward. In his second career as a stallion, standing at Ashford Stud since 2009, Majestic Warrior was put on the map when his filly Princess of Sylmar won five grade one races in 2013, including the Kentucky Oaks at odds of 39-1. He is also the sire of stakes winners Shanon Nicole, Best Warrior, and Lady Sabelia.

In her career, Majestic Presence hasn’t won a race since her maiden score in her second start at Del Mar in August. She won a Maiden Special Weight at one mile on the main track, which is an all weather surface, or polytrack. Since then, has run three races, all on dirt, and only hit the board in her last start, the Delta Downs Princess (G3). She did compete in the Breeders’ Cup Juvenile Fillies, but finished off the board in 9th.

Majestic Presence seems to be a late maturing filly, but has yet to dodge top competition. Since her maiden score, she has run against graded stakes competition, and does not seem to shy away too much. She may not be as fast maturing as some other fillies, and may not be on the rise as quickly as her foe Take Charge Brandi, but she has a lot of pedigree and back class to back her up. Given time and experience, Majestic Presence could easily become a top-notch filly. If any trainer can get her ready for big races as a soon-to-be sophomore filly, it would be Jerry Hollendorfer. If Majestic Presence makes it to the Kentucky Oaks, she could easily be a threat, as she has a pedigree gears toward distance and class.