Gulfstream Park Saturday March 14, 2015 Picks & Plays: Although there are not any Kentucky Derby Trail races at Gulfstream Park this weekend, the Saturday races are very competitive and provide an excellent opportunity to hit some races at good odds. This week we are changing our strategy by only handicapping the races we are most confident about while looking for nice Daily Doubles and Pick 3 options. 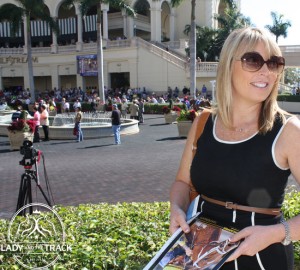 The Saturday races at Gulfstream Park are very competitive and provide an excellent opportunity to hit some races at good odds. Photo: LATT

Although Dogwood Trail is moving up in class, she has been winning very easily and always gate-to-wire. She is unbeaten in two starts and looks strong in sprint races. Just try to catch her! Taylor S is returning in a six-furlong race, a distance where she has shown her best performance. Her last race was a creditable third in the Forward Gal Stakes (G2) over seven furlongs, so now she is eligible to improve enough to win this race. Perchance is unbeaten in two starts and is best known for being the sister of Dreaming of Julia. She’s moving up in class, but this is an appropriate race for her to make her own name.

After his Kentucky Derby flop, Vinceremos returned on October 8, 2014, to finish in third place in a race won by the good Bay of Plenty. Although Vinceremos has not raced in more than five months, he returns with plenty of nice workouts to his credit and looks fit for this race. Pletcher usually does very well with layoffs of 60-180 days, so this horse should be in the mix. Looking Cool is dropping back to a level where he is really strong. If Vinceremos does not fire, then Looking Cool could be ready to win this race.

This is a wide open race where a longshot may be able to win. Nicky’s Brown Miss is dropping in class and returning to a level at which she is competitive. Pine Needles won in her debut wire-to-wire without Lasix, and her trainer Christophe Clement has a 30% wining percentage when he adds Lasix for the first time. Whimsicality is another who will be using Lasix for the first time. In her last race at Tampa Bay Downs, she was no threat while playing as the favorite. Now she’s dropping in class and has a great shot to win in this spot. Finally, I’m using the favorite Mrs McDougal, a filly who looked visually impressive in her maiden score, but she really won it with a low speed figure.

Jambles is a son of Quality Road who has been improving each race and has been facing tougher competition. If he is able to simply reproduce his last performance, he could win by several lengths. In theory, his only contender is Dreaming of Gold, a horse who has lost incredible races with sub-par trips. He’s switching from turf to dirt which is a concern because he looks more like a turf horse. In this race I’ll be using Jambles as a single.