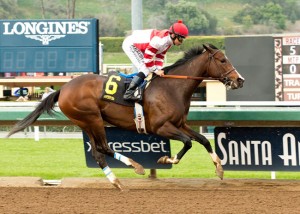 Songbird (Medaglia d’Oro – Ivanavinalot, by West Acre) Songbird continues to demolish the California fillies with every race. She had a paid workout in the San Ysabel Stakes at Santa Anita and will now head to the Santa Anita Oaks before heading to Kentucky. She is the obvious choice for the top Oaks contender.

Cathryn Sophia (Street Boss – Sheave, by Mineshaft) She is the best of the East. Her effortless win in the Davona Dale, she has proven that the extra 1/8th  in the Gulfstream Park Oaks should not be a problem. She may be the only filly, at the moment, who will meet Songbird with an unblemished record. What an interesting race the Oaks should be.

Venus Valentine (Congrats – Valentine Fever, by Stormin Fever) After breaking her maiden in her debut, she struggled in a listed stakes and two optional claiming raced before she exploded through the rail at the Fair Grounds in the Rachel Alexandra Stakes (G2) at odds of 74-1. Her spot is definitely not set in stone on this top ten, but her Rachel Alexandra race was highly impressive to me, especially as she defeated some good competition.

Polar River (Congrats – Bayou Tortuga, by Empire Maker) Polar River is undefeated over in Dubai. She recently won the UAE Oaks and is headed to the UAE Derby to face males. Polar River has done nothing wrong and looks like a real possibility to come back to the United States, where she was bred, to win the Kentucky Oaks.

Land Over Sea (Bellamy Road – Belle Walting, by Pulpit) This half sister to War Story has been running after Songbird in her last 5 starts, including three second place finished, a third place, and a 7th in the Breeders’ Cup Juvenile. Land Over Sea was a clear second in the San Ysabel Stakes, but still could not catch Songbird. If she goes to the Oaks, she could have a chance to defeat her rival if things go against my top two.

Lewis Bay (Bernardini – Summer Raven, by Summer Squall) Lewis Bay is bred on the same exact cross as the highly regarded Zulu. Lewis Bay has started four times and has never been worse than 2nd. She recently was not able to catch Cathryn Sophia in the Davona Dale (G2). Lewis Bay is a good, young filly and should continue to mature and move forward.

Mo d’Amour (Uncle Mo – Neverthesame, by Scat Daddy) After breaking her maiden in her first start for King of Prussia Stable, Mo d’Amour finished 7th and last in the Demoiselle Stakes (G2) behind Lewis Bay. She has a terrible start and we never a factor. If one can strike a line through that performance, she has never been out of the top three. She since then has finished 3rd in the Ruthless Stakes and then won an allowance and the Busher Stakes. Todd Pletcher seems to have a good filly with her and she has a lot of potential yet to reveal.

Carina Mia (Malibu Moon – Miss Simpatia (ARG), by Southern Halo) Carina Mia, since the beginning of the new year, has been working a hole in the wind down at Payson, preparing for her three-year-old debut. However, there has been some sickness outbreaks and Carina Mia is not getting any extra time to prepare for the upcoming Oaks. She needs to get into racing now if she stands a chance at making it to Louisville.

Flora Dora (First Dude – Aidan, by Dixieland Band) Flora Dora has a lot of upside to her, based on pedigree alone. She had a bit of a tough time in the stretch of the Busher Stakes, won by Mo d’Amour. She has time to recover and regroup before Gazelle Stakes on April 9 or she could ship out to another track. Whatever she decides to do, she has a good shot to make the Kentucky Oaks with a good placing, or a win.

Nickname (Scat Daddy – Nina Fever, by Borrego) Nickname was 2nd last time out in the Martha Washington Stakes, behind Marquee Miss, who just barely missed this list. Since then, Nickname has put in three works, each getting quicker and quicker. Her latest work was a bullet and she should be running again very soon. If she does, and performs poorly, she is likely not to be on the next list.