Catching Up With Future Super Sire Palace Malice by Madison Feldhahn: After Exaggerator’s commanding Haskell performance, Curlin is being regarded as a future super sire. His two-year-olds bring an average of $447,833 and his yearlings bring $157,250. Curlin has proved that he is a great racehorse sire, but how will he fare as a sire of sires? 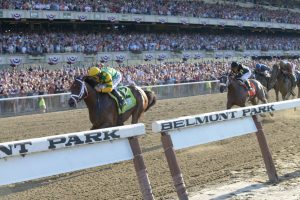 In nineteen starts, Palace Malice or Pal as he is called affectionately, hit the board 68.4% of the time (thirteen starts). His most important wins could be considered the 2013 Belmont Stakes and the Met Mile Stakes.
Photo: LATT

Palace Malice (Curlin-Palace Rumor, by Royal Anthem) is not only an extremely talented racehorse, but he is the only son of Curlin currently at stud. In nineteen starts, Palace Malice or Pal as he is called affectionately, hit the board 68.4% of the time (thirteen starts). His most important wins could be considered the 2013 Belmont Stakes and the Met Mile Stakes, which he won almost exactly a year apart. After the Whitney Stakes, he was injured and never made another start in 2014. Despite his dominant start to the 2014 season, Pal did not win Eclipse Champion Older Male. However, in both 2013 and 2014, Palace Malice was voted Aiken Trained Horse of the Year.

Curlin himself was an exceptional racehorse, winning the 2007 Preakness Stakes and the Breeders’ Cup Classic Stakes, beating Street Sense and Hard Spun in both of those races. In addition, he had a tremendous Dubai World Cup score over eventual World Cup winner, Well Armed. Curlin remained the leading North American money earner with $10,501,800 until California Chrome shattered that record. Where Curlin really shines, however, is the breeding shed. In his four crops of three year olds, he has had four horses finish in the top three in four different years (Palace Malice, 1st Belmont, 2013; Ride on Curlin, 2nd Preakness, 2014; Keen Ice, 3rd Belmont, 2015; Exaggerator, 1st Preakness, 2016). In addition, Curlin has a slew of talented race mares, including Curalina, Stellar Wind and Off the Tracks.

Smart Strike, the sire of Curlin, hit the board 87.5% of his career. His two largest wins came in the form of the Salvator Mile Handicap and the Philip H. Iselin Handicap, where he defeated Serena’s Song. Besides those two graded stakes wins, Smart Strike did not leave much of a legacy on the racetrack. However, he is represented by sires Lookin At Lucky, English Channel, Centre Court and Square Eddie as well as Breeders’ Cup and Champion Eclipse Two-Year Old Filly winner My Miss Aurelia.

Classy ‘n Smart, great granddam of Palace Malice, is a reine-de-course through her two best offspring, Dance Smartly and Smart Strike. Dance Smartly won the Queen’s Plate, Prince of Wales Stakes and Breeders’ Cup Distaff. In addition to his stakes winning dam, Palace Rumor, Palace Malice has plenty of class in his pedigree. Besides Classy ‘n Smart, his pedigree boasts nine reine-de-courses within five generations, many of whom are dams or granddams of exceptional sires.

Though we will not know how great, or not-so-great, of a sire Palace Malice will be for a couple years, the stallion is in great company. Palace Malice has the pedigree to become such a horse. If he can produce half as well as Curlin does, Three Chimneys Farm may have a future super sire in their stallion barn.