Leading Candidate Ransom The Moon, Others Expected To Scratch 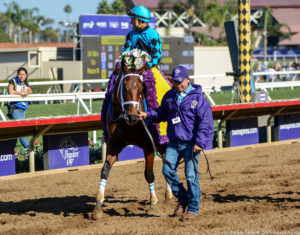 The names of eight horses were dropped into Del Mar’s entry box for Saturday’s $200,000 Pat O’Brien Stakes (G2), with six runners coming from the barn of two leading trainers — John Sadler and Phil D’Amato. Agave Racing’s Bing Crosby Stakes (G2) winner Ransom The Moon has already been scheduled to scratch from the seven-furlong Breeders’ Cup Challenge “Win & You’re In” event, as he’s already qualified for Racing’s Championship Day with his connections looking elsewhere for his final prep. At least a couple others are expected to follow, leaving the field short by the time it leaves the gate at 5:00 p.m. PT on Saturday.

Also, this year’s Pat O’Brien marks the long-awaited return of last year’s Breeders’ Cup Mile (GI) winner Battle of Midway, who was sent back to trainer Jerry Hollendorfer earlier this year after proving to be subfertile in his duties as a stallion at WinStar Farm.

The Pat O’Brien is named for the popular 1930s and 1940s actor who, along with Bing Crosby, built the Del Mar Thoroughbred Club. Throughout his lengthy career O’Brien made more than 100 movies — many to this day are classics and in regular rotation on Turner Classic Movies — and spent most of his summers in what he called his favorite place, where the turf meets the surf next to the Pacific Ocean.

Inaugurated in 1986, it took a few years for the Pat O’Brien Stakes to take off as a must-stop race for local sprinters. And though California-bred standout… (m0re)