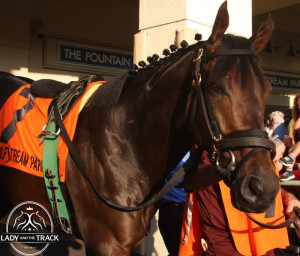 Itsmyluckyday breezed four furlongs at Calder Race Track in South Florida before heading to Kentucky for his chance to Run For The Roses. The three-year-old Holy Bull Stakes winner and 2nd place Florida Derby winner is an early favorite amongst experts and excited fans.

Itsmyluckyday is trained by Calder Hall of Fame trainer Eddie Plesa, Jr. and owned by Trilogy Stable & Laurie Plesa. Lady and The Track sat down with owner Laurie Plesa and found out that Itsmyluckyday will make his way to Churchill Downs today in a van alongside a gorgeous Kentucky Derby hat!

Itsmyluckyday Interview with Laurie Plesa:
Trixie: How did you get into the business of owning horses? Can you please tell us a little bit about your background?
Laurie: I was raised in the business. My father was a jockey at Charles Town in West Virgina. My cousin, Donna Servis, is a jockey’s agent at PARX. Jason and John, who are my brothers, are both trainers. John was the trainer of Smarty Jones.

Trixie: How many horses do you own? How many are currently in training?
Laurie: Eddie and I own a few pieces of several horses and we have a few homebred horses as well. We usually buy one horse a year in partnership with Trilogy Stable. Eddie has trained for Trilogy for about 22 years now.

Trixie: Do you think fashion is a big part of the race day experience?
Laurie: Yes I do. You must have a hat! My hat is actually going on the van with Itsmyluckyday to Kentucky. It’s just too cumbersome to take on the plane!

Trixie: What advice would you give a beginner at the track?
Laurie: I don’t know if I have any advice except to simply surround yourself with honest, hardworking, and knowledgeable people.

Trixie: Is Itsmyluckyday a Trilogy Stable homebred colt?
Laurie: We purchased Itsmyluckyday out of the OBS March sale as a two-year-old for $110,000 from Eisaman Equine. Eddie really liked him from the beginning.

Trixie: Do you have a favorite Itsmyluckyday memory you can tell us about?
Laurie: Itsmyluckyday goes into his stall in the morning after his bath and he lies down and rolls from side to side then attacks his hay bin! He is a silly horse that brings us fun and laughter. 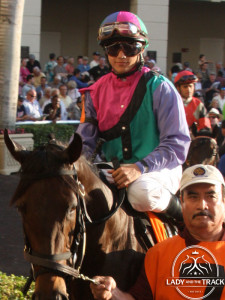 Jockey Elvis Trujillo will be aboard Itsmyluckyday in the 2013 Kentucky Derby.

Trixie: Can you tell us a little bit about Elvis Trujillo?
Laurie: Elvis Trujillo did a great job of riding Itsmyluckyday in the Holy Bull and the Florida Derby at Gulfstream Park. Elvis is a family man who has a lovely wife and three great boys.

Trixie: What do you think Itsmyluckyday’s biggest challenge will be in the 2013 Kentucky Derby?
Laurie: I think our biggest obstacle right now is drawing a good post position.

Trixie: When will Itsmyluckyday arrive at Churchill Downs?
Laurie: He leaves for Kentucky on Friday April 25th.

Trixie: How did Itsmyluckyday get his name?
Laurie: The people who sold him as a yearling named him. Eddie and I really liked his name!

Trixie: What are a few of Itsmyluckyday’s personality traits?
Laurie: Itsmyluckyday is vey sweet horse. He loves to sleep lying down.

Lady and The Track would like to wish Trilogy Stable, Jockey Elvis Trujillo, Laurie Plesa, and the beautiful Itsmyluckyday the best of luck in the 2013 Kentucky Derby! Good Luck! Safe Run!

Lady and The Track would like to graciously thank Laurie Plesa for taking the time to make this interview possible. ~Trixie 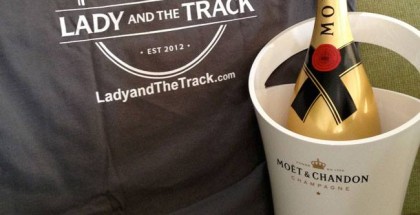 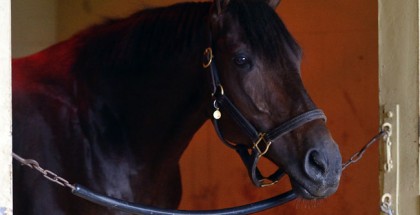