Puerto Rico’s Pride; Tonito M. Makes his American Stakes Debut, By Sigi Mendoza: Tonito M. is a Kentucky bred but started his career in Puerto Rico, being almost unbeatable with an excellent record of 6 wins and 1 second in 7 starts. The 3-year-old colt will make his American debut at Santa Anita Park on Saturday, May 10, 2014 in the 7th race at 4:00 PM PDT in the 7-furlong G3 Lazaro Barrera Stakes with jockey Rafeal Bejarano.

Tonito M. and jockey Rafael Bejarano will team up for the Lazaro Barrera Stakes at Santa Anita Park on Saturday, May 10, 2014 for trainer Jerry Hollendorfer. The 7-furlong race will be Tonito M.’s American debut.

Since his debut, Tonito M. was ridden by the native Javier Santiago. He was undefeated until his fourth start, when he was beaten by Roman Approval in a 1 1/16 m race. The latter was second behind the promising colt Bay of Plenty in his USA debut in Belmont Park in an allowance race on May 7, 2014.

After that defeat, Tonito M. improved and became a horse without rivals in Puerto Rico and finally was sold privately to the M Racing Stable. At first, Tonito M.’s connections thought to try to run in the Preakness Stakes, but it looks they change their minds and will give him the right time to adapt to U.S racing.

Tonito M. clocked a final workout of 6 F in 1:11.80 handily from the gate and now has Rafael Bejarano in the irons exiting from post #2 in the 2014 Lazaro Barrera Stakes. He’s facing some other tough boys, but he’s a talented colt with a bright future and his connections are expecting a great summer for him.

Sigi Mendoza lives in Barquisimeto, Venezuela and is a regular guest handicapper and contributor specializing in South American horses for Lady and The Track. Follow Sigi on twitter by clicking here.

Breeders’ Cup Turf On The Horizon; Impressive win by the Argentinian Sir Winsa... May 25, 2014 | Trixie Hammer 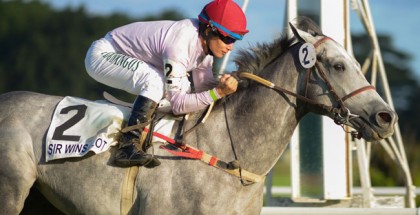