Mind Your Biscuits A Tasty Treat in Belmont Sprint 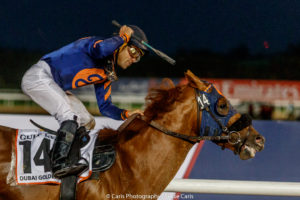 Multiple Grade 1-winning millionaire and fan favorite Mind Your Biscuits likely isn’t just the featured player in Saturday’s Belmont Sprint Championship (GII) on the Stars and Stripes Festival cared, he might actually be the marquee name on the entire day as he makes his first start since his dominating three-length romp in the March 25 Dubai Golden Shahen Stakes (GI) at Meydan.

The The 4-year-old New York-bred son Posse, who is owned by J Stable, Head of Plains Partners, Summers, Summers and Kisber et al, is not only running for a win in the $350,000 sprint, he’s also aiming for an all-expenses-paid spot in the November 4 Breeders’ Cup Sprint (GI) at Del Mar since the event is a “Win and You’re In” for Racing’s Championship Day. The Chad Summers trainee won’t have a walk in the park, though, in his return from a three-month break as he’ll face six other talented speedsters, including… (more)

Twelve Fillies Vie For A Million Bucks in Belmont Oaks