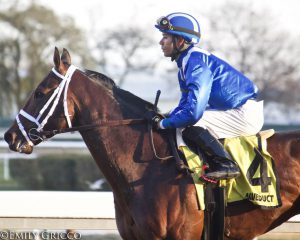 Since the Jerome Stakes (GIII) was moved to January to serve as a Kentucky Derby (GI) prep race, no winner has emerged to even place in the Triple Crown races. This year, however, a field of seven newly minted sophomores will try to turn that luck around win this event before continuing down the Triple Crown Trail.

This year, the one-mile-and-70-yard feature will be contested over the Aqueduct inner track and for a purse of $150,000. In recent years, some honest runners have won the race, such as Vyjack (2013) and El Kabeir (2015). This year, there is no true standout in the field, but there are some notable names based on their connections alone.

Shadwell’s Takaful, a Kentucky-bred son of Bernardini, is a promising individual for trainer Kieran McLaughlin. The colt broke his maiden in his debut at Belmont Park, traveling 6 ½ furlongs and coming in eight lengths in front of the second-place horse. Takaful then finished third in his first graded stakes, the Remsen Stakes (GII), behind Mo Town (Uncle Mo) and No Dozing (Union Rags). 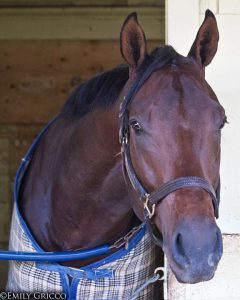 The running style Takaful has displayed in his two lifetime starts shows that he enjoys being out on the front end, controlling the pace and loping along on the lead. In the Remsen, Takaful started averagely, but was then hustled toward the lead and had earned a three-length lead by the time the field reached the middle of the first turn. His first quarter went up in :24 2/5 while he continued to open up on the field behind him, and he’d gained a 4 ½-length length lead before reaching a half-mile, which he clocked in :48 4/5. Jockey Jose Ortiz had tried to slow the race down, but he and his mount felt the pressure of Mo Town coming into the homestretch and after a 1:14 six furlongs for three-quarters of a mile, the early leader was no match for the charging Mo Town and settled for second that day.

The Remsen may be a discouraging race when backing Takaful here, but with the cut back in distance it looks like a good spot for him to gain some much-needed confidence and the Jerome should be a good race to display the colt’s talent.

Trainer Todd Pletcher has two colts in the Jerome Stakes, one being the Remsen’s fourth-place finisher, Win With Pride. The colt is another late runner who will need a solid pace to run at, but his grinding run in the Remsen Stakes showed some potential. Win With Pride is a son of Distorted Humor and the A.P. Indy mare Love and Pride, clearly showing he’s bred to go long and get stronger as he matures. He also broke his maiden at today’s distance at Belmont Park. Mike Repole bought this colt at last year’s Keeneland September Yearling Sale for $450,000 so the pedigree and connections are clearly there for this colt.

Finally, the Cathal Lynch trainee, El Areeb, is the second horse in the race with early speed. El Areeb is entering the Jerome Stakes off two straight wins, the most recent being in the James F. Lewis III Stakes at Laurel Park. However, the gray son of Exchange Rate will need to prove two turns is not an issue.

Exchange Rate as a stallion was a decent sprinter to middle-distance runner, winning the Tom Fool Handicap (GII) and placing in the Frank E. Kilroe Mile (GIIT). Some of the stallion’s best progeny are Ermine, who won the Apple Blossom Handicap (GI) and was second in the 2006 Kentucky Oaks (GI), and Ball Dancing, winner of the 2015 Jenny Wiley Stakes (GIT).

Other Jerome runners include Bonus Points, a Maryland-bred colt trained by Todd Pletcher. The maiden winner and stakes-placed son of Majestic Warrior most recently finished second in the Maryland Juvenile Futurity. The Three Diamonds Farm runner may turn out to be a turf runner later down the road and recently finished second in the grassy Awad Stakes.

Kieran McLaughlin sends a second horse to the post here with True Timber. The son of Mineshaft broke his maiden last time out at Aqueduct, traveling six furlongs on the inner track. Since he’s out of a Tiznow mare as he matures he is likely to grow into himself and appreciate more distance. He did break his maiden from off the pace and if he is truly pace reliant, he may have to settle for a placing as there is not much pace in the Jerome.

West Point Thoroughbreds and trainer Tom Alertrani send out a gelding by Hansen, named The Walk. He is a maiden winner and stakes placed, but has never been beyond 6 ½ furlongs though it’s not much of a surprise at this stage in his career. The Walk is out of a Boston Harbor mare, a broodmare sire who has proven time and time again that he is indeed a speed influence rather than infusing his progeny with stamina. This youngster sold at the Fasig-Tipton New York Saratoga 2015 Select Yearling Sale for $200,000. He will need to step it up to win this race.

Finally, New York-based trainer Rudy Rodriguez sends out a son of Union Rags named Everybodyluvsrudy. The colt just broke his maiden last time out after a series of second-place finishes and also a fifth in the Hopeful Stakes (GI). The colt is out of an A.P. Indy mare, which would indicate he’ll appreciate the distance here, but he will definitely need to step up his game. He is a mid-pack runner and could get the first jump on the frontrunners, who could be backing up coming into the stretch. The colt looks promising moving forward.

Post time for Monday’s Jerome is approximately 3:50 p.m. ET. The winner of the Jerome will earn 10 points toward a possible start in the 2017 Kentucky Derby and runners coming in second, third and fourth will earn 4, 2, and 1 point(s), respectively.