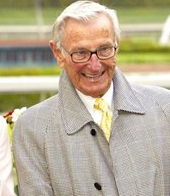 Saturday’s $150,000 Robert B. Lewis Stakes (GIII) at Santa Anita Park has drawn a short field of five, which could prompt an interesting rider’s race in California’s next step on the road to the Kentucky Derby (GI).

Jerry and Ann Moss already have Gormley making headlines on the Derby Trail and they look to add another to the contenders list in this race with the John Sherriffs-trained Royal Mo. The bay colt, by Uncle Mo out of the Saint Ballado mare Royal Irish Lass, debuted in July finishing a well-meant second going six furlongs at Del Mar to the highly regarded Bob Baffert trainee Irish Freedom. Off until November, Royal Mo returned going seven furlongs at Santa Anita, this time, however, he completely missed the break and was left with too much work to do for the distance. He wound up second again, though, to another highly regarded Baffert trainee in Beach Bum. Finally in his third try, stretching out to a mile at Del Mar coupled with two-turns and the trademark patience of his trainer, it all paid off for Royal Mo with an easy front-running victory over six rivals. Recent rain in Southern California has produced a bit of an irregular work pattern for the colt, but the drills he has been able to get in have been strong ones.

Sheer Flattery did not make his debut until the end of September last year, but the chestnut colt has quickly gotten four starts under his belt for owners Thomas Barrow, Richard Robertson and Jerry Hollendorfer, who is also the colt’s trainer. The son of Flatter was an even fourth in his September 24th debut when going six furlongs at Los Alamitos. In his second start, he ran on willingly to finish second 4 ½-lengths behind top Kentucky Derby prospect Mastery. Next out, going six furlongs for the third consecutive race, Sheer Flattery was slow to start and closed stoutly late for fifth behind the subsequent Sham Stakes (GIII) runner-up American Anthem. Like Royal Mo, two-turns did the trick for this colt, as he broke his maiden by a nose going 1 1/16 miles at Santa Anita. It is worth noting that the race was run over a sloppy racetrack.

The remaining three horses in the field are all trained by Doug O’Neill, led by the grade 3 winner Term of Art. Owned by Calumet Farm, the son of Tiznow took three races to break his maiden, with the breakthrough w

in coming when going a mile at Santa Anita. After that race he was confidently handled, being entered in the Breeders’ Cup Juvenile (GI), in which he finished a one-paced ninth. He was then entered for the Cecil B. DeMille Stakes (GIII), originally scheduled for one mile on the turf; the race was rained onto the main track. Running near the back of the field early, he rallied to prevail by 1 ¼-lengths, picking up his first graded stakes win in the process. Term of Art is coming into the race off of a fifth-place finish in the Sham.

The Robert B. Lewis is carded as the second of nine races at Santa Anita on Saturday. Slated for 1 1/16 miles on the main track, approximate post time is 1:00 pm PT.

For Future Book odds on trainers for this year’s Kentucky Derby, click: