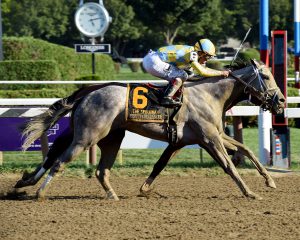 John C. Oxley’s early Forward Gal Stakes (GII) favorite Pretty City Dancer has not been seen since her dead-heat finish in the Spinaway Stakes (GI) at Saratoga last summer after being injured and missing some time, which caused her to also miss the Breeders’ Cup Juvenile Fillies (GI). However, trainer Mark Casse has been overseeing her return to training and is confident she is the Kentucky Oaks (GI) type. This spot should be a nice test of her coming back to the racing scene at age three and improving with some time off.

Since returning to Casse’s shedrow in mid-December Pretty City Dancer has put in seven published works. The grey daughter of Tapit has recorded three bullets in addition to logging some other quality workouts. The filly, who was an $825,000 yearling purchased is owned by the same man who also campaigns current Kentucky Derby favorite Classic Empire, who races later on the card in the Holy Bull Stakes (GIII) in his first start of the year. 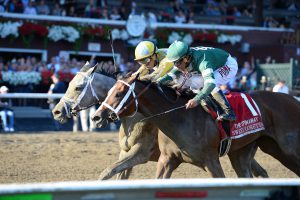 Pretty City Dancer (outside) reaches the wire at the same time as Sweet Loretta for a dead-heat victory in the 2016 Spinaway Stakes (GI). Photo: NYRA/Coglianese

Pretty City Dancer is hoping to gain her form again going seven furlongs and her pedigree suggests she should be more the capable of rebounding and getting the distance. She is out of the Carson City mare, Pretty City, making her a half-sister to Lear’s Princess, a graded stakes winner and multiple grade 1-placed. She also gets influence from A.P. Indy, Mr. Prospector, Nijinsky II and Nashrullah.

While Pretty City Dancer is coming on off a layoff, another filly is coming on off a close call in the Old Hat Stakes. Bode’s Dream is a two-time stakes winner while sprinting, never going beyond six furlongs. Trainer Todd Pletcher is sending the Bodemiester filly to see her ability to get seven furlongs. Bode’s Dream has a speed-oriented pedigree, having influence from Smoke Glacken, Mr. Prospector and Exclusive Native. Her sire, Bodemeister, was a Grade I winner of the Arkansas Derby and then placed second in both the Kentucky Derby (GI) and Preakness Stakes (GI). He is a son of Empire Maker and looks to be a stallion with a lot of upside.

Finally, Old Hat Stakes victor and the one to hand Bode’s Dream her first career defeat, Wildcat Kate, will be making an appearance in this race. The filly is a daughter of Kantharos and out of a Wildcat Heir mare and was able to turn the tables in the Old Hat after a quick early pace and closing to earn the victory. Wildcat Kate doesn’t have a pedigree that screams distance, but seven furlongs is not a distance she should have a problem with. Kantharos was an undefeated 2-year-old winner who was retired too early due to injury. However, his best offspring are also sprinters, including X Y Jet and Mr. Jordan. Additionally, broodmare sire Wildcat Heir was a sprinter and a top Florida stallion for years.

The Forward Gal Stakes also had six other fillies enter hoping to take aim at the Kentucky Oaks in May: Lirica, Summer Luck, Ms Locust Point, Brahams Cat, Tequilita and My Lerler.