Texas Red Sidelined From Kentucky Derby Trail, Temporarily: The favorite in the 2015 Kentucky Derby Future Wager Pool, Texas Red, has been sidelined due to a foot abscess. Confirmation with co-owner Erich Brehm, Sr. by email revealed the 2014 Breeders’ Cup Juvenile Champion is healing just fine and will point towards the Arkansas Derby if all goes according to plan. 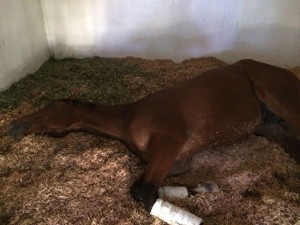 Most recently, the fan-favorite Texas Red finished 2nd in the G2 San Vicente Stakes at Santa Anita Park on February 1, 2015 just behind Lord Nelson. Experts agree that Texas Red looked strong in the seven-furlong race and should improve nicely before the first Saturday in May.

After a little bit of recovery time, we look forward to seeing Texas Red in the 141st running of the Kentucky Derby on May 2, 2015.