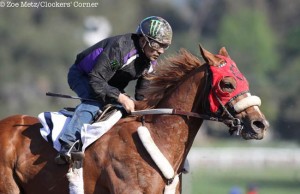 Now 6 for 6 after five ungraded stakes victories in a row, the Carla Gaines-trained Smokey Image has a chance to vault onto the Kentucky Derby (GI) scene with a good effort. In fact, numerous handicappers already placed him on their latest Derby lists.

Believe it or not, this handicapper had not paid much attention to Smokey Image and needed to watch his races.

Smokey Image won his career debut at Pleasanton last June easily enough, although he failed to switch leads. The following month, he crushed an ungraded stakes race at the same racetrack, while failing to switch leads again. When horses turn for home, their front right leg is supposed to lead the action, and he struggled with performing the proper change.

One month later, Smokey Image competed at another small California racetrack, Santa Rosa, and won less easily. He failed to switch leads once more. The same problem occurred in his Del Mar wins through September and October. To his credit though, in the October race Smokey Image became shuffled back behind a wall of horses entering the turn and fought his way through.

Finally, Smokey Image switched leads cleanly in the California Cup Derby at Santa Anita in January. Not coincidentally, he looked a lot better coming down the lane as well. Jockey Victor Espinoza liked the win quite a bit and had high praise for the Cal-bred.

Those are strong words from a man who only lost one Triple Crown series race in his past six attempts.

Horses exiting state-bred races always face a tough task when entering open company, and bettors should be aware that an open romp versus a restricted field will not always translate into the same result at higher levels.

With that said, Smokey Image ran superbly last time and may simply need to repeat the effort.

Other eyes will focus on the Bob Baffert-trained Mor Spirit, winner of the Robert B. Lewis (GII) last month over fellow San Felipe runners Uncle Lino and I Will Score. The winning margin of just less than two lengths may not impress some, but maybe Mor Spirit is one of those horses who does the minimum amount of effort required to win races.

He certainly appears lazy in the mornings, as the aborted workout on Feb. 23 proved. Gary Stevens, the regular rider for Mor Spirit, explained the situation to Claire Novak of Blood-Horse.

“I didn’t know the horse had earplugs in today,” Stevens said. “He’s a lazy workhorse anyway, until I cue him up. When I went to cue him up going into the turn, his ears didn’t move. When I started riding him around the turn, he didn’t respond. He was unresponsive going around the turn and I was exhausted … he pulled himself up.”

Danzing Candy and Exaggerator are legitimate opponents too, with the former coming into this race like Cupid as an unproven talent, and the latter horse a stakes veteran by now with five straight graded stakes attempts.

The San Felipe is a difficult race and bettors will not go wrong taking a shot with almost any horse in this field. Smokey Image has a fair chance to win, and Mor Spirit gets the slight nod from a class perspective. With 50 Kentucky Derby qualifying points to the winner and 20 to the runner-up, the San Felipe offers at least two automatic spots. The next superstar may be in this field!