Chasing Triple Crown History: Part I – The attainment of the Triple Crown is a horse racing achievement that is equally illustrious and elusive. Only eleven horses in the long history of the races have been able to complete the trio, and there have been numerous near-misses in the meantime. However, the three races have not alway been considered to be some marvelous achievement, and it was many years after horses had already accomplished the task that it was recognized as such. 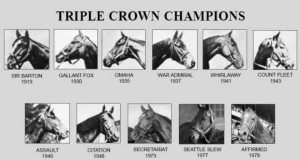 Only eleven horses in the long history of the races have been able to complete the Triple Crown trio, and there have been numerous near-misses in the meantime. Photo: digitallydanielle.com

While the Kentucky Derby is certainly the most recognizable American horse race of modern times, it is the youngest of the three events. The Derby was first run in 1875 on some Kentucky land owned by John and Henry Churchill, a portion of land that eventually evolved into Louisville’s mammoth racetrack of Churchill Downs. The race holds historical importance as the first event for three-year-olds to race over the classic distance of 1-1/4 miles, and sportswriter Bill Corum coined the descriptive phrase of the “Run for the Roses” to depict the competition for the exalted blanket of roses.

Two weeks after the Kentucky Derby – in modern times, at least – is the second leg of the Triple Crown, the Preakness Stakes. The Preakness was established in 1873 and was first run at Pimlico before being run for a few years at the New York tracks of Morris Park and Gravesend Course. The race returned to its home state of Maryland in 1909 where three-year-olds now compete over a 1-3/16-mile distance in pursuit of a blanket of black-eyed Susans.

The Belmont Stakes, the behemoth challenge and downfall of all recent Triple Crown hopefuls, is the oldest of the three races, first being run in 1867. The June mile-and-a-half distance of this final leg has crushed the attempts of would-be Triple Crown victors, but it also holds the title of “the Test of the Champion.” Owners and breeders in particular prefer to win this race and its blanket of chrysanthemums over the other two simply because colts who conquer this jewel tend to mature into more superior sires in the long run.

The three races were first referred to as the entity of the Triple Crown by famed horse racing writer Charles Hatton, who grew tired of referring to the three races separately and opted for the phrase for the sake of efficiency. His shortcut became so popular that by 1941 newspapers were referring to Whirlaway as the year’s Triple Crown winner. However, the title did not become formally official until 1950 when the Thoroughbred Racing Associations in New York deemed it to be so. Thus, the association retroactively rewarded the title to each of the past eight winners while awaiting the emergence of the next.

As the first jewel of the crown approaches, it is of utmost importance to review the glorious careers of past Triple Crown winners while continually looking forward to the next victor in order to properly gain respect for this oft intangible Thoroughbred feat.

In 1916, a diminutive chestnut colt was foaled on John E. Madden’s thriving Hamburg Place near Lexington. A son of Star Shoot and out of the Hanover mare Lady Sterling, the eventual first Triple Crown winner was christened Sir Barton.

Madden had rather high hopes for his young ward, so at age two he was entered in some of the most important juvenile stakes races, the Tremont, Flash, U.S. Hotel, and Sanford Memorial. Sir Barton lost all of them and caused Madden to decide that selling the colt may not be a poor business decision. Fortunately enough, John Kenneth Levinson Ross was looking to add to his fairly new stable. Ross was a former commander of a World War I destroyer in the Royal Canadian Navy before forming his racing stable in 1915, and he purchased the young Sir Barton for $10,000.

By this point in his young career, Sir Barton was regularly suffering from soft, shelly hooves. The impairment became so detrimental that his farrier had to insert piano felt between the shoes and his feet. Regardless of his efforts, the colt experienced constant pain while racing, and he often lost shoes in his races, one time even losing all four shoes before he hit the finish line.

H. G. Bedwell, an expert at returning horses to their top running conditions, became the trainer of Ross’s new charge, and the colt rewarded him with a solid second in the Futurity Stakes. Thus, Sir Barton exited his two-year-old season without any victories.

Still a maiden, Sir Barton was entered into the Kentucky Derby as his first start at three to serve as a rabbit for the more favored Ross horse Billy Kelly. On May 10, 1919, under jockey Johnny Loftus and over a heavy, wet track, Sir Barton did his job as a rabbit a bit too well. The plain chestnut colt charged to the lead and stayed there, finishing five lengths ahead of his stablemate and becoming the first maiden to win the Derby. His freak performance astonished onlookers and left many racing enthusiasts unconvinced of his class. 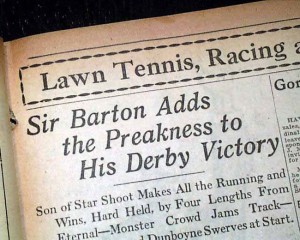 Bedwell and Ross entered Sir Barton in the 1919 Preakness Stakes, at that point scheduled for a mere four days after the Kentucky Derby. Photo: rearenewspapers.com

Bedwell and Ross then entered the colt in the Preakness Stakes, at that point scheduled for a mere four days later. They also entered the filly Milkmaid to break up the field of horses for Sir Barton to take the victory at his leisure, but they may as well have not even bothered. It took little urging by Loftus for Sir Barton to win the race by four lengths, making believers of some of those who witnessed his seemingly impossible Derby victory.

It didn’t take long for the inside news of Sir Barton’s outright mean and nasty disposition to spread. The colt seemed to despise all other animals and humans, simply acting aloof regardless of his company. Bedwell often lamented training the colt as Sir Barton would only train against fresh horses who would compete with him and make it seem like a real race, forcing his long-suffering trainer to waste the potential of other horses in his barn.

To keep Sir Barton sharp, Bedwell ran the colt in the Withers Stakes in the time between the Preakness and the Belmont, an unheard of move in modern times and one that would stand alone until Count Fleet’s repeat. He easily won by four lengths and caused a buzz that the colt would most certainly not lose in the Belmont.

June 11 dawned, and Sir Barton traveled to the post for the Belmont as the 7/20 favorite over the two horses that emerged to face him. The indistinguishable chestnut colt won with a flourish, finishing five lengths in front in a mild canter while setting a new record of 2:17.40. Although Sir Barton and his connections were not aware of it at the time, he became the first to achieve the most sought-after title of Triple Crown champion.

While Sir Barton was no doubt a devil to work with, Commander Ross’s son most eloquently summed up why the high maintenance chestnut colt was worth it and even why current difficult Thoroughbreds are worth training: “Horsemen speak of Thoroughbreds with this faraway gaze as ‘having the look of the eagle,’ and they believe it is invariably the sign of greatness. Sir Barton was an insatiable, exasperating creature. But, he had the look of the eagle.”

Looking Through the Lens on Blue Grass Day