The Gold Cup at Santa Anita Tops Off Action Packed Saturday: The 2015 Gold Cup will be held at Santa Anita Park this Saturday, June 27, with gates opening at 10:30 a.m. and a first post time of 1:00 p.m. The Gold Cup is a Grade I race for three-year-olds and up, and the race is run at a distance of 1¼ miles. This premier event is one of the biggest races of the day with a $500,000 purse. There will also be a special parade featuring American Pharoah, who became America’s first Triple Crown Champion in 37 years by winning the Belmont Stakes on June 6, between the seventh and eighth races at Santa Anita Park as part of a blockbuster day that will also include the Grade I, $500,000 Gold Cup at Santa Anita and three other graded stakes. 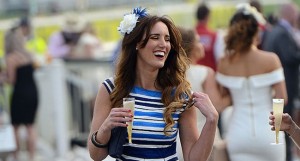 For a special look that will take you from day to night at The Gold Cup at Santa Anita, try an on-trend summer staple, the nautical look. Photo: worldwideracing.com

The Gallop Out is another regular summer favorite and a new Club House destination that features a sports bar that sits above Santa Anita’s first turn. Admission is free with $10 Club House admission.

There is also the Bud Light Lounge that will be open from 10:00 in the morning until 6:00 in the evening, and it also has an all-you-can-eat buffet from noon until 3:00. In addition, your first Budweiser or Bud Light is free. Both The Gallop Out and the Bud Light Lounge will have televisions for patrons to watch the live race and private betting stations or kiosks.

From 12:30 until 5:30, there is a chance for handicappers to close out their seasons with a bang. Santa Anita will have a two-day live handicapping contest with a $5,000 buy-in, and the prize pool will feature $75,000 in cash prizes with the first place winner being awarded with $40,000. This special handicapping event will also provide five spots in the 2016 NHC in Las Vegas and five spots in the 2015 Breeders’ Cup Betting Challenge.

Santa Anita will also be bringing back their Guest Chef Series for the 27th only to celebrate the end of the season. The event will be held in The Chandelier Room and will feature a glass of champagne, entrance to the Chandelier Room, a Daily Racing Program, a wagering tip sheet, and a unique menu with specialty cocktails by Julian Cox.

Yet another special event for the day will be the Uncorked event held from noon until five o’clock in the evening. Guests will get to taste fine wines and sample cuisine from popular local restaurants while enjoying a fine art exhibit. The cost is $60 per person and includes admission, parking, a racing program, wine tasting, cuisine sampling, the art exhibit, a souvenir wine glass, and a seat in the Santa Anita Club House.

After the race, guests can enjoy music under the stars. From 7:30 until 10:00 at night, guests can enjoy Maestro Victor Venor and the California Philharmonic as they perform classics by the Beatles and Beethoven.

For a special look that will take you from day to night at The Gold Cup at Santa Anita, try an on-trend summer staple, the nautical look. The nautical look can be dressed up or down and is a perfect look to celebrate summer and the end of a great racing season at Santa Anita Park. Think navy and red or stripes with silver or gold detailing or accessories. Just make sure not to take the look too literal – no sailor hats or anchors. You want your look to be a subtle nod to all things nautical; you don’t want to look like an actual seaman. At night, throw on a navy blazer to complete your nautical look and dress it up.

You will be ready for everything from The Bud Light Lounge to the outdoor evening concert in your nautical look at santa Anita Park for The Gold Cup.