Honor Code Edges Liam’s Map in Whitney at Saratoga: It took the length of the stretch, but Hall of Fame trainer Shug McGaughey’s Honor Code ran down a dead-game Liam’s Map, who was making his graded stakes debut, to take the Grade 1, $1.25 million Whitney by a neck on Saturday at Saratoga Race Course, giving McGaughey his third win in the race and first since 1989. 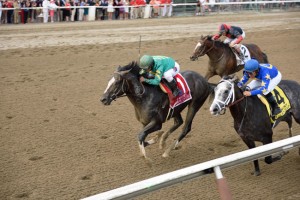 It took the length of the stretch, but Hall of Fame trainer Shug McGaughey’s Honor Code ran down a dead-game Liam’s Map, who was making his graded stakes debut, to take the Grade 1, $1.25 million Whitney by a neck on Saturday at Saratoga Race Course, giving McGaughey his third win in the race and first since 1989. Photo: Coglianese/NYRA

Despite entering the race off a powerful 3 ¾-length win in the Grade 1 Metropolitan Handicap on June 6 at Belmont Park, questions surrounded Honor Code’s effectiveness at two turns, but the son of A.P. Indy left no doubt he’s equally adept at one and two-turn racing.

Breaking from the rail under Javier Castellano, Honor Code lagged well behind a torrid early pace set by Liam’s Map, who was hounded by last year’s Whitney winner Moreno.

The two leaders zipped around the clubhouse turn, going the opening quarter-mile in 22.79 seconds, and continued to motor along down the backstretch as a chasm formed between the vanguard, which also included Normandy Invasion, Noble Bird, Wicked Strong and Lea, and the closers, comprised of Honor Code, 7-2 favorite Tonalist, and V. E. Day.

After a half in 46.00 and three-quarters in 1:09.72, the two distinct groups began to diffuse, with Liam’s Map kicking away from the leading sextet and Honor Code, shadowed by Tonalist, charging after the leader.

By the eighth pole, up by five lengths, Liam’s Map appeared to have the race well in hand, but Honor Code continued to chip away at the deficit. At the sixteenth pole, Liam’s Map still seemed the likely winner, but a relentless Honor Code would not be denied, getting up in the final jumps to complete the 1 1/8 miles in a sparkling 1:47.82. Tonalist, who matched strides with Honor Code through the stretch, had to settle for third, 1 ½ lengths behind Liam’s Map.

“I thought with the early fractions they might back up a little bit. But I misjudged it and [at the sixteenth pole], I looked up and said, ‘Oh, man,'” said McGaughey, who previously won the Whitney in back-to-back years with Easy Goer and Personal Ensign. “It was a spectacular race. A spectacular horse. People have always held him in high regard, but wondered if he could run around two turns. He’s got some quirks about him, could he overcome them? I guess he answered all that today. I’m glad it’s over with and I’m glad we won, so I don’t have to worry about that part of it.”

The Whitney wasn’t the first time Honor Code pulled off an improbable victory at the Spa. The 4-year-old ridgling made his debut at the Spa as a juvenile and came from 22 lengths off the pace to win by 4 ½ lengths in a seven-furlong maiden race.
Since his auspicious debut, Honor Code’s career has been punctuated by layoffs, but the dark bay cemented himself at the top of the handicap division with back-to-back, marquee Grade 1 wins.

“He’s an amazing horse,” said McGaughey, who trains Honor Code for Lanes End Racing and Dell Ridge Farm. “He has been, really, from the start, from his maiden race here in the slop when it looked like he was hopelessly beaten, and he won. He’s really grown into himself. We’re very excited and very happy about today. To be able to win a race like the Whitney is a big feather in our cap.”

Honor Code returned $9.50 on a $2 win wager and bumped his earnings to over $2 million. The victory was Castellano’s first in the Whitney.

Todd Pletcher, trainer of Liam’s Map and currently the Spa’s leading trainer with 16 wins, commended the performances of the top two finishers following the race.

“I could see Honor Code was coming, so I knew it would be really close until the finish,” said Pletcher. “He ran unbelievably well, setting those fractions to start and being there to the end. He just couldn’t hold off a really good horse.”

Last year’s Belmont Stakes winner, Tonalist, finished 4 ¼ lengths ahead of Wicked Strong in fourth, and remained winless at Saratoga having finished second in third in the 2014 Jim Dandy and Travers, respectively.

“We got in the position we wanted to be in and tried to make a run,” said John Velazquez, Hall of Fame jockey aboard Tonalist. “It took a long time to get him going and the other horse passed him. He finally started running at the quarter pole and then he kept running.” 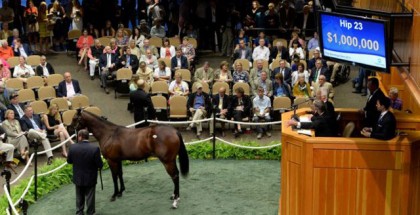