Griffin Patterson Prepared for Early Success in Racing Industry: Staring right in the face of the worn-out adage that horse racing will disappear with the “old” generation is Griffin Patterson, a 22-year-old with big plans in the racing industry. Even at such a young age, Griffin has already tested the waters of many aspects of the Thoroughbred world in a Renaissance-like attempt to experience and learn as much as he possibly can. 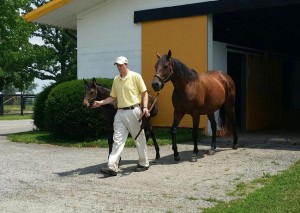 Griffin went on to an internship at Claiborne Farm that provided him with an opportunity to accompany the farm veterinarian each day and to work with such impressively bred mares that he was regularly left starstruck.
Photo: Griffith Patterson

“My main goal is to gain more experience doing anything and everything and to see just about as much as I can, to try to fit as much as I can into a small period of time,” Griffin relayed over welcomed cold drinks at The Rock in Paris, Kentucky, one afternoon after a long day of work at Denali Stud.

Griffin spent the early years of his life on his grandparents’ Glenary Farm near Frankfort, Kentucky, and that was where his passion for racing began. His participation in the breeding aspect of that small family band of broodmares and foals piqued his interest, but he had yet to fully immerse himself in the industry. When his family made the move into Lexington, he was separated from the farm and was instead encouraged to pursue as many sports as possible, an encouragement heavily leveled by his father who had always been involved with the breeding and selling side of racing.

“He never really talked with me about horses as much,” Griffin noted regarding their move away from the farm. “I’d always ask him about what was going on, and he’d beat around the bush about it, so that just made me want to get into it even more.”

Griffin began his college career with Centre College, but after a year there, he returned to Lexington to attend the University of Kentucky. This time, Griffin’s father encouraged him to try their equine program rather than steering him away from horses, undoubtedly recognizing his son’s unwavering intention to involve himself in the racing business.

While Griffin wholeheartedly enjoys and appreciates the stellar equine program offered by the University of Kentucky, he recognizes and strongly promotes the need for aspiring horse people to get their hands dirty. “You can learn as much as you can on paper, but you’re really not going to get it until you’re out there and you see everything and know how to do it,” Griffin continually reiterated.

Griffin has certainly proven that he’s not just a big talker when it comes to cutting out a path within the industry. In a short amount of time, Griffin has worked on both racetracks and farms, done an extraordinary amount of successful pedigree research for his own family, and been a part-owner in several claimers.

For his family, Griffin had a sharp enough eye to recognize the quality of a $25,000 claimer named Juanita. Stakes-placed prior to their claim, that filly went on to win the Indiana Oaks and La Troienne Stakes (both GII at the time) before selling for $1.2 million at auction in foal to Medaglia d’Oro. Her success essentially sealed his passion for the industry: “That was a home run,” Griffin reflected. “Those don’t come around a lot, but that was kind of it for me.”

His stint on the track was also a particularly enlightening time for Griffin as he was mentored by assistant Joe Sharp while he worked under the training banners of Mike Maker at both Saratoga and Keeneland. Hotwalker duties kept Griffin busy in the early stages of his work there, but he quickly moved up to be a groom. Many afternoons Sharp would take Griffin around the barns and to the claiming office, all the while providing maximum insight into life on the racetrack.

Griffin then went on to an internship at Claiborne Farm that provided him with an opportunity to accompany the farm veterinarian each day and to work with such impressively bred mares that he was regularly left starstruck. Another shift ensued when he began work at Denali Stud with yearling sales prep, but he has certainly managed to succeed there as well, providing a well-rounded collection of industry experience.

Along with a couple of friends, many of whom are Darley Flying Start students, Griffin has also had some success as an owner. Many of the horses the group has claimed off the track have done quite well, and Griffin’s experience in the industry has only grown due to them.

Although he has three classes left to take at the University of Kentucky before he’s able to graduate, Griffin doesn’t intend to let racing fall by the wayside. He hopes to return to the barn of Mike Maker for more hands-on experience at the track while finishing up his time in school, and in October he hopes to apply for the prestigious Irish National Stud program that would start in January.

Ultimately, Griffin is currently unsure of his primary goal in the horse racing industry. Because of his passion for pedigree research, something in the bloodstock industry might be a good fit, but he is aware that he has some time and even more to learn before he decides. He certainly has an abundance of options when the time comes, and success will only be around the corner.

Editor’s Note: Know of any young people doing big things in racing? Send them our way for a chance to be featured in a special series!