Two-Year-Old Thoroughbreds to Watch: Team Picks 5: An increasing number of two-year-olds are making their debuts, and many of them are attracting attention from horsemen and fans alike. Championofthenile, Tale of S’avall, Swipe and Carella are a few that the Lady and The Track team deem to be watch-worthy!

Carella
Tapit – Cara Rafaela, by Quiet American
Reinier’s One to Watch
While Cara Rafaela’s other foals are not on the same level as Bernardini, the filly Carella recently ran well enough to offer hope for another family star. Last Sunday at Saratoga Race Course, Carella closed nicely to finish in third in a seven-furlong maiden sprint. Trainer Thomas Albertrani generally takes his time with two-year-old horses, and this one made her career debut. With Tapit as the sire and a dam responsible for producing Bernardini, Carella should enjoy stretching out to a more suitable distance. 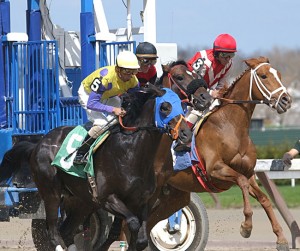 An increasing number of two-year-olds are making their debuts, and many of them are attracting attention from horsemen and fans alike. Photo: Coglianese/NYRA

Swipe
Birdstone – Avalanche Lily, by Grand Slam
Jessica’s One to Watch
If he can get out from under Nyquist’s shadow, Swipe may be a good colt to keep an eye on. In five starts, Swipe has only won once, taking the Summer Juvenile Championship Stakes as his maiden victory. That victory has proved to be an impressive one as time has passed because he defeated eventual Graduation Stakes winner Mrazek and Hopeful Stakes (GI) winner Ralis. His last two starts in the Best Pal Stakes (GII) and Del Mar Futurity (GI) resulted in runner-up finishes to the brilliant Nyquist, but he performed well enough to give an indication that he could appreciate more distance. The $5,000 purchase from last year’s Keeneland September yearling sale has certainly exceeded expectations, and here’s to hoping he finds his way to a well-deserved second win.

Tale of S’avall
Tale of Ekati – S’ Avall, by Awesome Again
Casey’s One to Watch
Trained by Bartley Tagg, best known for training Funny Cide, this young son of miler Tale of Ekati broke his maiden at first asking at Saratoga on Travers day. The colt did so impressively and without the presence of Lasix. The colt is a homebred for Fipke Stables. After his maiden voyage, the colt quickly returned to the worktab for Tagg and recorded a four-furlong workout in :48.87, forth fastest of eighteen works for the distance. The colt looks like one that will easily stretch out. His pedigree suggests he will stretch out well and may be a threat up to 1-1/8 miles. Look for him to stretch out in his next start.

Championofthenile
Pioneerof the Nile – Lantern Glow, by Mineshaft
Reinier’s Other One to Watch
Leave the Light On’s half-sibling broke his maiden last Friday at Saratoga Race Course in impressive fashion, winning by six lengths over New York-bred horses. This effort came after throwing in a clunker on turf, although more forgiving handicappers will overlook the career debut anyway, no matter the surface. In dirt racing, a thinned-out field is a good sign, and besides the margin from Championofthenile to the runner-up, the official chart indicates seven more lengths until the third-place horse.