Fillies and Mares Challenge the Males in Breeders’ Cup Series

Fillies and Mares Challenge the Males in Breeders’ Cup Series: The Breeders’ Cup series is approaching, and every horse racing fan is waiting to see his or her favorite horse participate in and hopefully win a Breeders’ Cup race. Within the series there are restricted races for fillies and mares, but others are non-restricted races in which we rarely see fillies and mares participate unless they are superstars. Females triumphed in open races through Mizdirection’s victories in 2012 and 2013. However, 2009 was the year mares practically dominated all-comers with Zenyatta’s win in the Classic and Goldikova’s in the Mile. This year, females have a huge chance to beat the colts in the Classic, Mile, and Turf Sprint, thus generating much enthusiasm among many fans. 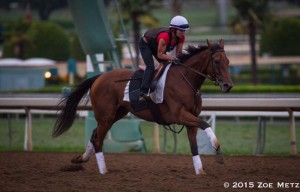 Santa Anita-based superstar mare Beholder, pictured above on the main track at Santa Anita, prepares for an epic showdown with Triple Crown Champion American Pharoah and others in the $5 million Breeders’ Cup Classic at Keeneland on Oct. 31. Photo: Zoe Metz

Beholder, surely the most discussed mare in recent months, will try to achieve a win in the Classic over the best horses of the country. In watching her past performances, especially her win against males in the Pacific Classic (GI) over 1¼ miles at Santa Anita, she seems to have a good chance to take the Classic. Some skeptics could argue that the Pacific Classic field was not of Grade I caliber and that she has no wins outside of California. However, she smashed the Pacific Classic field while making a move that impressed all spectators, and her races outside of California have been good enough, including a nice second in the 2013 Kentucky Oaks (GI). Since she crossed into open company in the Pacific Classic, all conversations have focused on the clash between the mare and Triple Crown winner American Pharoah. Beholder is already considered to be a great mare, but if she’s able to replicate Zenyatta, a Classic win would be the icing on the cake. As usual, Beholder, a Mandella trainee, will be ridden by Gary Stevens.

Perhaps overshadowed by Beholder is the good filly Tepin who is trying to beat males in the Breeders’ Cup Mile. This has been a fantastic year for Tepin since she has four wins and two seconds in six starts. It is important to highlight that Tepin is unbeaten at one-mile races this year with her last race, the First Lady Stakes (GI), being her best performance of the year. In that race, she showed one more gear than she had shown in her past races, so her connections decided that this is the time for her to face the best milers of the country.

Representing Ireland comes another filly who is challenging the boys in the Mile. Esoterique (IRE), a daughter of Danehill Dancer, gained an automatic berth into the Breeders’ Cup Mile after winning the Prix Jacques Le Marois (GI) over one-straight mile with a powerful late kick. She is also known for almost beating the fantastic Solow in the Queen Anne Stakes at Ascot. This filly has all the credentials to be the favorite of the race, plus she is a Euro, a fact that tends to induce a bit more confidence in her turf abilities. Tepin and Esoterique will be challenging tough horses like Karakontie (JPN), Lea, Mondialiste (IRE), and Grand Arch, among others, but they both have the quality to win the Breeders’ Cup Mile.

Another strong female team is expected to run in the Breeders’ Cup Turf Sprint. Lady Shipman, a three-year-old filly who had a four-race win streak before being beat in the Buffalo Trace Franklin County Stakes by a head by veteran sprinter Ageless, is facing the boys for first time. Just one loss likely means nothing given her impressive win streak, and she’s ready to take on the males. Unfortunately, Ageless, the mare who beat her last time out, suffered a minor injury in the race; her participation in the Turf Sprint is still possible, though. Ageless was nearly able to win this race last year, finishing fourth and just three-quarters of a length behind winner Bobby’s Kitten, who is also pre-entered in this year’s edition of the race.

This year, fillies and mares have a huge chance to be the protagonists of the Breeders’ Cup series, and it’s certain that they’ll attract an extra number of spectators to the track seeing as these kinds of match-ups are relatively uncommon in horse racing. 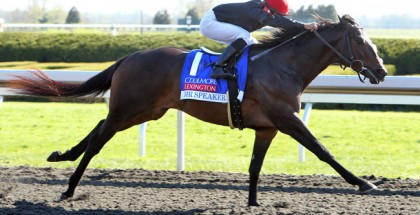 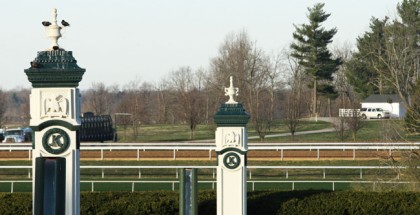 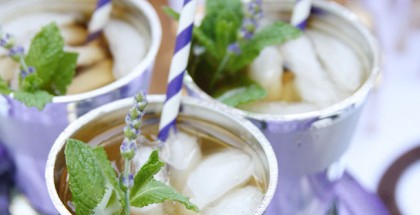