Mac Daddy Mac Launches Career in Bob Hope Stakes at Del Mar: At this time of year, we regularly witness the unveiling of talent from two-year-old horses making their way down the Kentucky Derby Trail. When juveniles win convincingly, daydreaming of the first Saturday in May becomes regular practice for fans, owners and trainers alike. 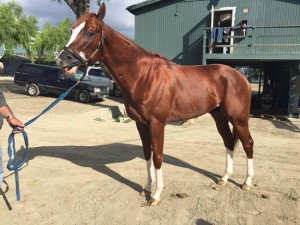 Mac Daddy Mac, a two-year-old son of Put it Back out of Abuela Esther (URU), by Crater (ARG), impressively won a maiden special weight over 5½ furlongs on the dirt at Santa Anita on October 24, 2015. On that occasion, the horse was ridden by Jose Leonardo Verenzuela and trained by Jack Carava. Two weeks later, the news broke that Mac Daddy Mac was sold to the Mucho Macho Man Team, Reeves Thoroughbred Racing, and is now under the care of Kathy Ritvo. In an attempt to uncover news about Mac Daddy Mac, we contacted Dean Reeves from Reeves Thoroughbred Racing, and he kindly provided us with information regarding their young colt.

“Mac Daddy Mac caught our attention after his maiden win. We got word through a bloodstock agent we use that the horse was for sale, and we immediately began negotiations to purchase the horse,” Reeves said.

Certainly, Mac Daddy Mac has an uncommon pedigree for U.S. horse racing seeing as his entire damside consists of Uruguayan and Argentinean influence. Even though Reeves Thoroughbred Racing is not particularly familiar with South American bloodlines, Reeves was attracted by some tough names in the horse’s pedigree. “I do not have an affinity for these bloodlines, but I do feel that the damside for this horse had some very solid and successful runners. I felt it was an interesting bloodline and would provide the horse with superior speed and even the ability to cover some distance,” Reeves explained.

In his debut, Mac Daddy Mac was ridden by Venezuelan jockey Verenzuela, but the new connections are switching to who will likely become his official rider for his next race. “The rider in the Bob Hope will be Gary Stevens. On Saturday, Gary worked the horse at Del Mar, covering four furlongs in :47.4,” Reeves stated.

Mac Daddy Mac’s full brother Rescind the Trade was unbeaten in two starts, a duo of victories that included a nice win in a two-turn race in which he beat the well-known and recently retired Pants of Fire. In fact, there are plans to stretch out the horse if he easily handles the seven furlongs of the Bob Hope Stakes (GIII) this weekend. “I believe he will stretch out as he gets older. I think he has the early speed necessary to be in position for a two-turn race and in time learn to rate and go two turns,” Reeves relayed. “If he runs well at seven furlongs, we will most likely look for his next race to be at 1-1/16 miles.”

Mac Daddy Mac’s connections already have a plan in the works for next year. “Our 2016 plan is to move him to Gulfstream Park and prepare him for a run at the Kentucky Derby prep races. We are not sure yet which race would be first, but that decision will be made in early January,” Reeves said.

Mac Daddy Mac is definitely a horse to take into account for the Derby Trail if he wins and convinces again. It is important to highlight that his dam, Abuela Esther (URU), has become a nice broodmare since she has also produced the stakes-placed Marathon Lady (Graeme Hall), a filly that ran nice races against tough runners like Close Hatches and Dreaming of Julia.

Lady and The Track would like to thank Dean Reeves for taking the time to talk to us. We look forward to seeing Mac Daddy Mac giving his best on the track.

A Girl and “Her” Horse