Exaggerator Wins Delta Downs Jackpot and Derby Points: After an “okay” fourth-place finish in the Breeders’ Cup Juvenile (GI), Exaggerator did not let his followers down this time by winning the $1 million Delta Downs Jackpot (GIII). The son of Curlin fought every step during the stretch drive and prevailed over the game Sunny Ridge. 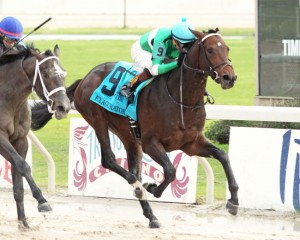 After an “okay” fourth-place finish in the Breeders’ Cup Juvenile (GI), Exaggerator did not let his followers down this time by winning the $1 million Delta Downs Jackpot (GIII). The son of Curlin fought every step during the stretch drive and prevailed over the game Sunny Ridge.
Photo: Coady Photography

With the victory, Exaggerator earned 10 qualifying points for the Kentucky Derby (GI) in May. This brings his total number of points to 16, which is close to what typically lets a horse into the starting gate for the nation’s most important race.

The initial stages of the race looked like a cavalry charge towards the front, with the massive longshot Iron Dome taking a short lead. Behind him and within range were Memories of Winter, Whitmore, Exaggerator, Found Money, Sunny Ridge and Forevamo.

Exaggerator showed his class and soon took over, while Sunny Ridge moved early and engaged him entering the final turn. Whitmore remained within striking range, but began losing steam.

When they turned for him, the event turned into a match race between Exaggerator and Sunny Ridge, one of the last active sons of the great racehorse Holy Bull. Sunny Ridge, perhaps affected by a wide trip, eventually fell short by a neck and settled for second place.

“Today, he was allowed to be rhythm … to be himself,” Desormeaux said.

Also, the trainer blamed himself for Exaggerator’s loss in the Breeders’ Cup Juvenile. The Twitter handle @DerbyContenders posted a comment from (trainer) Desormeaux admitting he had Exaggerator “too much on edge” for his previous start.

Can Exaggerator move on and rank among the leading Derby contenders next spring? Right now, it is too early to tell. While the Delta Downs Jackpot offers an incredible purse, many leading colts are either too tired from the Breeders’ Cup to compete in it or continue to wait for the spring races. At least Exaggerator is almost assured of a Derby spot. History shows that 20 points, or even less when considering the dropouts, is enough to enter the starting gate.

Kent and Keith Desormeaux had one of the leading contenders this year in Texas Red, before an injury stopped him. Exaggerator needs to progress, but he can take them to Churchill Downs.

Tonalist on Target for Cigar Mile 2015 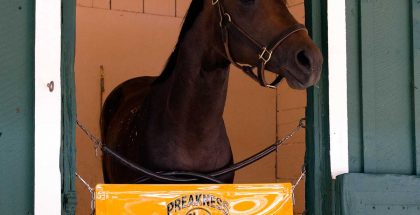