California Chrome Pointing Towards Santa Anita, Dubai: Successful three-year-old colts, especially those who win at least one Triple Crown leg, tend to retire early due to their breeding value. Yet California Chrome, the 2014 Kentucky Derby (GI) and Preakness (GI) victor, is still around. 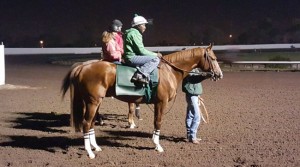 “He’s preparing himself really well,” trainer Art Sherman commented on video. “With good weather and the way we’re going right now, it shouldn’t be a problem to have him ready for the San Pasqual if I don’t miss any time.”

California Chrome will then head towards Dubai for a second run at the $10 million Dubai World Cup.

“ … we have unfinished business in Dubai,” explained Martin on Thoroughbred Daily News.

Pleasing fans (and haters) will be difficult. Kentucky Derby winners tend to become overanalyzed for the rest of their careers. This one, still active approaching age five, will be watched extremely close by casual fans. If he fails to win one race, they may demand his retirement. In fact, certain people already hope California Chrome retires.

Without mentioning any specific forums, “I wish he stayed at Taylor Made” and “he might get injured” seem like popular comments underneath anything online related to California Chrome.

The pressure seems unfair, and puzzling to those who love horse racing.

Any horse, at any time, can become injured for the smallest accident or mistake. If there is a constant worry over whether a healthy racehorse can stay safe on the racetrack, then maybe horse racing is unsafe for all horses.

Most readers do not want to see horse racing shut down. To stay alive though, the industry needs stars, especially with the retirement of American Pharoah. California Chrome will help retain and attract new fans with his presence.

For handicappers who do not believe in California Chrome’s ability, they should feel ecstatic that a rockstar such as this one will attract American money if he continues as scheduled and competes in Dubai.

To the connections’ credit, California Chrome appears likely to stay inside California the rest of the year.

“When he gets back from Dubai, the Pacific Classic is the next one we’ll be pointing for,” Sherman said last month.

The Breeders’ Cup Classic (GI) is California Chrome’s final goal in the second half of 2016, and this time Santa Anita will host. Fans need patience though. When California Chrome runs next month, it will not be a good idea to expect this horse to win right away. Horses come into their peak form in the third start off the layoff.

Regardless, the pitchforks will come out if he finishes second or worse at Santa Anita, and once he travels overseas. At least, give Chrome a pass on his return race and see where he goes from there.