Marking Can Upset Runhappy in Malibu Stakes at Santa Anita: Runhappy projects to attract a large amount of supporters in the Malibu (GI) on Saturday, the opening day of Santa Anita Park’s quality-filled winter and spring meet. Profiting off such a fan-favorite will be difficult though. Three horses can defeat the main star, including the lightly-raced Marking, Watershed and Lord Nelson. 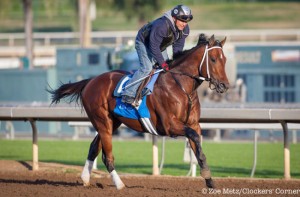 Owned by Godolphin Stables and trained by Kiaran McLaughlin, Marking comes into this race undefeated off two lifetime starts. Neither victory came in a stakes race, and the BRIS numbers are uninspiring.

Yawn? Young, lightly-raced horses tend to improve as they learn how this game works. While some handicappers might look at Marking’s pair of 96 BRIS Speed Ratings and scoff, his average figure seems likely to change as he races and matures.

The connections felt confident enough to enter their colt in the Cigar Mile (GI) against experienced Grade I talent such as Tonalist and Private Zone. Unfortunately, Marking drew a poor post position.

“Marking won his only two races easily and is very talented,” McLaughlin said last week, as seen in a press release on Santa Anita’s website. “He was entered in the (Grade I) Cigar Mile (won by Tonalist on Nov. 28) but drew the one post against older horses, so we decided to scratch and go in the Malibu.”

In Marking’s maiden win at Belmont Park, he finished over two lengths clear of Dannie’s Deceiver, who returned to break his own maiden on the same racetrack before disappointing in an allowance by finishing fourth.

Post position two also offers Marking room to maneuver around as well, as his stablemate to the right Watershed likes to drop and come from behind. Expect regular rider Jose Lezcano to sit a few lengths off Runhappy and move on the far turn.

Watershed, sporting the same connections, and jockey Joel Rosario, comes into this race with graded stakes experience. In August, he ran fourth in the King’s Bishop (GI) at Saratoga Race Course, which Runhappy won.

He then took an allowance race at Keeneland and earned a puzzling BRIS Speed Rating of 80, 21 points below the 101 gained from his King’s Bishop effort. At least, both stablemates are thriving at Santa Anita.

“We changed up this year and came out two weeks early to breeze here over the track,” Neal McLaughlin, brother of Kiaran, said. “The horses are happy, eating and enjoying the weather and I hope the plan works.”

If bettors want a non-Godolphin alternative to Runhappy, the Bob Baffert-trained Lord Nelson is their last hope. A proficient sprinter with only one loss at less than a mile, Lord Nelson should put in his usual solid effort. Also, note how Lord Nelson defeated the highly regarded Texas Red on this racetrack back in February.

Still, Runhappy needs to misfire, which remains a possibility for two main reasons. Breeders’ Cup winners are primed for their win, and sometimes throw a clunker in their subsequent race out of fatigue. Secondly, maybe Runhappy notices the controversy surrounding him. Does Runhappy miss his former trainer Maria Borell?

Can Laura Wohlers, 0 for 5 in 2015, reverse her losing ways in this spot? Horses are not machines and subject to produce different outputs under significant barn changes. Besides, it is difficult to swallow Runhappy’s low price.

Marking gets the nod, but Watershed and Lord Nelson are upset candidates too. Runhappy must be used in horizontal wagers along with those other three contenders.

Post time for the Malibu, the highlight of an outstanding card with four graded stakes races, is scheduled for 4 p.m. PT. No matter the result, the main event promises to be a great one!