California Chrome Brings Home Win in San Pasqual: Idle since March 28 in Dubai, 2014 Horse of the Year California Chrome came back running on Saturday at Santa Anita, as he forged to a 1 ¼ length win in the Grade II, $200,000 San Pasqual Stakes. Trained by Art Sherman and ridden by Victor Espinoza, the 5-year-old California-bred horse by Lucky Pulpit covered 1 1/16 miles in 1:43.39. 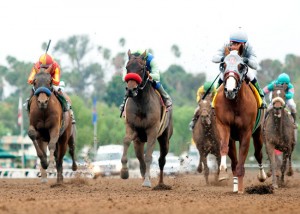 Breaking from post position four in a field of seven older horses, California Chrome utilized his natural speed to sit a comfortable second behind pacesetter Alfa Bird into and around the Club House turn. Well in hand under Espinoza, “Chrome” cruised to the lead under a hold approaching the quarter pole and kept runner-up Imperative at bay the final sixteenth.

“He could’ve opened up turning for home, but Victor put the Full-Nelson on him,” quipped Sherman. “It was just what we needed. He’ll get a lot out of this race, believe me. It set up just as we figured. I knew he’d show speed. He’s been wanting to run quite a bit right now…and I said ‘He’s got a lot of gas (speed) himself and you can place him where you want.

“That’s why he’s a perfect horse. You don’t have to bring a game plan with him. He can sit off the pace or go on the pace.”
Sherman said that California Chrome, who picked up $2 million for running second in last year’s Dubai World Cup, would be heading back to the Middle East later this month.

“He’ll ship Jan. 21, have one prep (in Dubai), then come home after the World Cup,” he said. “It’s very heart-warming to see his fans and the reception he received. I was just jammed full of people around the paddock. It was just great.”

Off at 3-5, California Chrome paid $3.20, $2.40 and $2.10. A winner of four Grade I stakes in 2014; the Santa Anita Derby, Kentucky Derby, Preakness and Hollywood Derby, California Chrome notched his 10th win from 19 starts Saturday, and with the winner’s share of $120,000, increased his career earnings to $6,442,650, thus surpassing two-time Breeders’ Cup Classic winner Tiznow to become the leading California-bred of all time. (North America’s all-time leader Curlin, retired with earnings of $10,501,800, while California Chrome currently ranks 25th).
Bred and originally owned by Perry Martin and Steve Coburn, California Chrome is now owned by California Chrome, LLC, which is comprised of Kentucky-based Taylor Made Stallions and Martin, who retains his majority 70 percent stake in the horse.

“We feel blessed to be a part of this, what a horse!” said new co-owner Frank Taylor. “He’s so sound and so genuine. He’s a special horse.”
Assistant trainer Alan Sherman, who watched the race from the Winner’s Circle while holding his two year old grandson, was satisfied with his stable superstar.

Trained by Richard Baltas and ridden by Mario Gutierrez, Imperative rallied from mid-pack and made the winner work late, while finishing one length in front of Hoppertunity. Off at 7-1, Imperative paid $5.80 and $3.00.

“I’m very proud of the horse,” said Baltas. “It looked like we might get to him there at the top of the stretch, but ‘Chrome’ was ready.”
Bob Baffert’s multiple graded stakes winning Hoppertunity, who came off a big second in the Grade I Clark Handicap at Churchill Downs Nov. 27, appeared full of run at the rail heading to the far turn, finished well but was unable to threaten the winner as he finished 3 ½ lengths clear of Hard Aces.

The second choice with Martin Garcia at 2-1, Hoppertunity paid $2.20 to show.