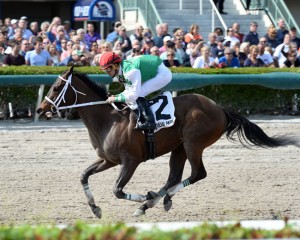 The daughter of Street Boss may have only won the seven-furlong stakes for 3-year-old fillies by 5 ½ lengths in her graded-stakes debut, but the manner in which she overcame a tardy start and subsequent traffic to overwhelm her competition with the utmost ease made Saturday’s performance particularly special.

“Actually, believe it or not, I was more impressed with this race than I was with the first two,” trainer John Servis said. “She beat a decent field of horses today and the way she did it today, she did it like a good filly.”

Cathryn Sophia had previously won her first two starts for fun, winning her debut by 12 ¾ lengths at Parx Oct. 20 and capturing the Gin Talking Stakes at Laurel Park by 16 ¼ lengths Dec. 5. The Maryland-bred filly was never threatened during those front-running performances, but she broke a bit slowly Saturday to sit fourth of six horses midway along the backstretch. She advanced quickly to gain striking distance behind the pacesetter, Island Saint, who was pressed on the outside by Ballet Diva around the turn and into the stretch. Jockey Joel Rosario angled Cathryn Sophia off the rail and she responded with a burst of speed that propelled her to a dominating victory without urging.

“She’s a nice filly. I thought she was going to be fast out of the gate and she actually took a little bit of time,” Rosario said. “When we got to the top of the stretch she had a beautiful stride and it was all her after that. She was game the whole way. It was very impressive.”

Cathryn Sophia ran seven furlongs in 1:22.04. Island Saint, the 5-to-1 second choice ridden by John Velazquez, held second, 4 ¾ lengths ahead of Ballet Diva and jockey Jose Caraballo. The winner’s performance was even more impressive considering she raced somewhat greenly in the stretch, switching leads a second time after suddenly finding herself on the lead with nothing but daylight in front of her.

“She showed me a lot of diversity for sure. She broke a little bit slow her first start, but she was so much better than them. It wasn’t far and she was by herself. Today, Joel let her sit back there and eat some dirt, and she settled nice. She got tucked in behind horses and waited patiently,” Servis said. “He said when he called on her, she just kicked. When I saw her switch back to her left lead late, I asked Joel about that, and he said she was just getting bored. He said, ‘When I asked her she just kicked.’ She ran away from those horses pretty easy and was looking for something else.”

Cathryn Sophia was purchased by Cash is King LLC for $30,000 at the 2014 Fasig-Tipton Mid-Atlantic September sale.
“It’s pretty exciting, and we love Gulfstream and the program here,” said Cash is King’s Chuck Zacney. “We’re going to try the mile race (Davona Dale Feb. 27) next.”

After Cathryn Sophia successfully stretched out to seven furlongs under less-than-ideal conditions Saturday, Servis is confident that she will handle the one-turn mile of the Davona Dale without a problem.

“She’ll probably break a lot sharper next time. She hadn’t run for a couple months and I hadn’t gotten her back to the gate,” Servis said. “She’s got a great mind. I think now that she broke again and has figured out what she’s supposed to be doing, she’ll leave there running next time and be pretty close, pretty easy.”