Undefeated Nyquist Wins Florida Derby and Heads to Louisville: Reddam Racing LLC’s Nyquist maintained his undefeated record with a commanding 3 ¼-length triumph in Saturday’s $1 million Xpressbet.com Florida Derby (G1) while establishing himself as the top candidate for the 2016 Triple Crown. 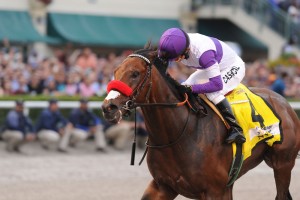 The Doug O’Neill-trained 3-year-old colt ran his career record to 7-for-7 while sweeping to victory in Gulfstream Park’s signature race, in which the son of Uncle Mo faced previously undefeated Mohaymen in the highly anticipated unprecedented West vs. East matchup.

The anxiously awaited showdown between Nyquist and Mohaymen developed at the top of Gulfstream Park’s stretch, but the Southern California-based 6-5 second betting choice pulled away to a convincing score under Mario Gutierrez as the East Coast-based 4-5 favorite weakened in mid-stretch to finish fourth under Junior Alvarado.

“He was pretty wide throughout, but the track is wet and we wanted to stay out in the clear,” trainer Kiaran McLaughlin, who had saddled for handy victories in the Holy Bull (G2) and Fountain of Youth (G2) as preps for the Florida Derby. “Congratulations to the winner. He ran big. We were awfully wide throughout and with the (wet) track you never know. We’ll regroup.”

Nyquist, the 2015 Eclipse Award-winning juvenile, made a most lucrative return to Gulfstream Park, where he was purchased in the 2015 Fasig-Tipton Florida sale for $400,000. In addition to earning the $600,000 winner’s share of the $1 million purse in his first start at Gulfstream, Nyquist also earned a $1 million bonus offered by the sale company to any graduate of the 2015 sale that went on to win the 2016 Florida Derby.

Wagering on Saturday’s 14-race program, which included eight stakes worth $2.4 Million in purses, produced a Florida Derby Day record handle of $32,082,270, eclipsing last year’s total handle of $27,255, 586. The $32.082 Million figure also represented the highest handle ever recorded at Gulfstream other than on Breeders’ Cup Days.

Nyquist became the first West Coast invader to capture the Florida Derby since Empire Maker (2003) and the first Eclipse Award champion to prevail in the important 1 1/8-mile Kentucky Derby prep. As he embarks on the Triple Crown campaign, he will attempt to follow in the footsteps of I’ll Have Another, the 2012 Kentucky Derby and Preakness winner who was owned by Paul Reddam, trained by O’Neill and ridden by Gutierrez.

“It’s such a team effort. I had reservations a month or so ago—Mohaymen in his own backyard, do we really want to do something like that? But we all very quickly got on the same page and, you know, I think we just had a very lucky trip. Mario broke great and did a great job riding and everything just went right. This whole trip other than being delayed one day, everything else went right,” O’Neill said. “…It’s a credit to the whole team how he came over, how he looked and how he ran.”

Nyquist broke alertly from the starting gate to lead the 10-horse field into the first turn and into the backstretch under a firm hold by Gutierrez in his second start of 20016. He was rated on the lead along the backstretch, pressed on the inside by Sawyer’s Mickey and on the outside by Chovanes.

“It was always part of the plan (to go to front). It just depends on the break; how the other horses were going to be acting, so coming out of the gate, I broke so clean and so fast so I just had to take the lead,” Gutierrez said.

After putting away the longshots heading into the far turn, Nyquist was joined to his outside by a Mohaymen leaving the turn into the homestretch. As Nyquist and Mohaymen rounded the final turn extremely wide, Majesto, a 21-1 long shot ridden by Javier Castellano, cut the corner to join the fray. Mohaymen began to struggle in mid-stretch as Nyquist responded when asked by Gutierrez and scooted to a comfortable win. Majesto held second, a length ahead of a late-charging Fellowship, who was four lengths clear of Mohayman. 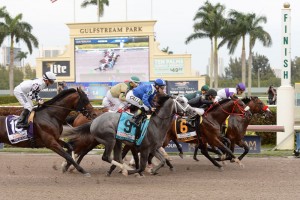 In addition to Nyquist, who is likely to be favored in the Kentucky Derby, Majesto and Fellowship earned sufficient qualifying points to join him at Churchill Downs May 7 should his connections opt to run.
Photo: Leslie Martin, Coglianese

Mohaymen was unable to sustain his bid.

“I’m a person that doesn’t like to blame the track all the time. I would say the only difference is that he never took me. He’s a horse that all the time drags me and jump in the bridle right away so when we turn to the backside he’s pulling me. This time he wasn’t pulling me. It got me a little worried,” Alvarado said of Mohaymen. “I tried to stay with him and give him a chance to get it all together. By the three-eighths pole I saw Nyquist getting along in front by himself and I had to move my horse. By that point, he always drags me there and this time I’m the one asking him. The track could be one little reason, but there’s nothing else I really can say. Other than that we were clear on the outside.”

In addition to Nyquist, who is likely to be favored in the Kentucky Derby, Majesto and Fellowship earned sufficient qualifying points to join him at Churchill Downs May 7 should his connections opt to run.

Grupo 7C Racing Stable’s Majesto made a giant leap forward in his first race since breaking his maiden at Gulfstream Feb. 27 in his fifth career start for trainer Gustavo Delgado.

“It was a beautiful trip. He really gave a big effort. Not too many horses step up like that and gallop out like he did. It was amazing because he hooked up with the best horses in the country. The good thing about him is I was saving ground and when a hole opened, he went through and finished really well,” Castellano said. “I think he’s going to be good going to the Derby. He has the points and he’s late-developing. He’s going to start getting really good. I am looking forward to him as he gets older.”

Jacks or Better Farm’s Fellowship came into the Florida Derby off a pair of late-running third-place finishes in the Holy Bull and Fountain of Youth for trainer Stanley Gold.

“I had a good trip. We broke and I got the position I wanted. When I asked him, he gave me a kick, but the other two kept running,” Lezcano said.

Mohaymen, on the strength of his Holy Bull and Fountain of Youth wins, has also earned a berth in the Kentucky Derby field.

Florida Derby starters have won 22 times in the Kentucky Derby (G1), the most recent winner being Orb, who parlayed a victory in the 2009 Florida Derby into a triumph at Churchill Downs on the first Saturday in May. Horses that started in the Florida Derby have gone on to capture a total of 57 Triple Crown races.

Nyquist is scheduled to be shipped to Keeneland Race Course in Lexington, KY at 9 a.m. Sunday to prepare for a quest to give Reddam his second Kentucky Derby success.

“I feel good. You only got the bonus if you won, so we wouldn’t have come unless we thought we had certainly a decent chance. We didn’t know at the end of last year that Mohaymen was going to be such a big horse on the radar. My feeling was, if you’re afraid to go run against someone [now] how do you really think you have a Derby horse?,’” Reddam said. “We just stuck to our plan and we thought if we get beat, we get beat, but we can’t be afraid. If you’re afraid in the business, you’re not going anywhere.”