California Chrome Draws Rail in Pacific Classic by Reinier Macatangay: Popular notion says great horses overcome any kind of trouble, but the saying is not always true. California Chrome, as talented as the 5-year-old horse is, has had problems overcoming a boxed rail position for much of his career, and will need to avoid it while starting from the rail on Saturday at Del Mar in the $1 million Pacific Classic (GI). 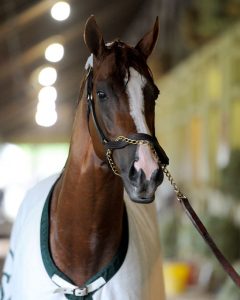 California Chrome, as talented as the 5-year-old horse is, has had problems overcoming a boxed rail position for much of his career, and will need to avoid it while starting from the rail on Saturday at Del Mar in the $1 million Pacific Classic (GI). Photo: Chelsea Durand, Coglianese/NYRA

California Chrome was owned by Perry Martin and Steve Coburn for the early part of his career, but a falling out occurred during his controversial 2015 season. Now, a group including Martin and Taylor Made Farm manages the horse’s career under the California Chrome LLC umbrella.

This year, the former 2014 Horse of the Year leads the chase once again for racing’s top award with wins in the San Pasqual Stakes (GII), Dubai World Cup (GI) and San Diego Handicap (GII), as well as an ungraded handicap at Meydan Racecourse. One more Grade I could lock up an Eclipse Award for the still-popular runner.

For what it is worth, trainer Art Sherman does not believe the rail will affect California Chrome too much.

“The No. 1 post is never good at any track but being a former jockey, I know that if he (Victor Espinoza) rides the right race the No. 1 post isn’t going to be a problem,” Sherman said for the track stable notes. “It depends on how the early fractions are and then you just go from there. It’s going to be a jockey’s race.”

Watch the races where California Chrome was stuck in a boxed rail position though, starting with the 2013 Golden State Juvenile Stakes at Santa Anita Park. The replay is on YouTube.

California Chrome starts off slowly from the rail and makes a nice mid-race move before the far turn. Once he reaches the far turn, he becomes stuck in a boxed position with his head high and eventually only manages a sixth-place finish. Sure, the horse directly in front fading did not help matters either, but Chrome just handles dirt in his face worse than others.

Disbelievers of this theory might point to the 2014 San Felipe Stakes (GII) where California Chrome won while racing on the inside, but he had the lead with no horse directly in front of him. Therefore, he did not take dirt.

Fast forward to the 2014 Belmont Stakes (GI) (replay), with California Chrome stuck with a rail post again. Espinoza gave up position and let Commissioner come in from the outside and lead, while General A Rod, Tonalist and Wicked Strong helped box the heavy favorite on the rail.

California Chrome switched to the outside on the far turn, although never looked too threatening in the stretch run. Maybe an injury which occurred at the break slowed him down. Regardless, he lost again after experiencing a boxed rail position.

After a short rest, California Chrome returned in the Pennsylvania Derby (GII) (replay) and drew the rail once more. Despite a decent break, Bayern, CJ’s Awesome and Protonico boxed him in. Ironically, the rail was playing good, and arguably golden, at Parx Racing for most of the card. California Chrome had absolutely nothing in the stretch run though.

Fast forward to 2016, when California Chrome competed in an ungraded 2,000 metres handicap (replay) to prepare himself for the Dubai World Cup. Even though he drew the rail, Espinoza somehow found a way to get his horse on the outside for a three-wide trip. From the outside position, California Chrome showed his dominance.

It should be noted closing-type runners are drawn outside of California Chrome for the Pacific Classic, meaning he should be able to clear those foes before any trouble sets in.

But, what if Dortmund is sent hard from the outside by Rafael Bejarano? Trainer Bob Baffert wins many races like this with speed horses who simply go the front and stay there, and Dortmund almost pulled off the strategy last month against California Chrome, so it would not be a surprise to see Dortmund try to wire the field again.

Defending champion Beholder, conditioned by Richard Mandella, owns plenty of speed too under Gary Stevens. What if some combination of Dortmund, Beholder and at least one other horse box California Chrome in?

“Our intention is to get her back (off the pace) and go back to our game that works,” he said.

Strategy can change depending on what Beholder’s jockey Gary Stevens sees at the beginning.

Hoppertunity, War Story, Hard Aces, Win the Space, Imperative and Dalmore complete the field. None of them hold a serious chance, although Hoppertunity may come late to pick up third or around there.

Officially, this writer chooses Dortmund to turn the tables on California Chrome. It should be a close “Win and You’re In” race, and one that racing fans will watch over and over again for years to come.