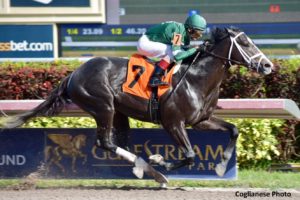 7 – Cloud Computing – Should stalk a good pace and take over the lead in the stretch drive to gain his first stakes victory, earning 100 points and qualifying for the Kentucky Derby. The Chad Brown trainee is coming off an excellent effort when second in the Grade 3 Gotham while making route and stakes debut in his second career start. Now switches to Irad Ortiz for this spot and shows good works.

3 – Battalion Runner – scratched from the Florida Derby last week and Pletcher elected to run here instead of the Santa Anita Derby. Showed improved speed when winning both starts at Gulfstream. Makes stakes debut and could give John Velazquez a third option to consider for the Kentucky Derby, even with a second place finish that would give him 40 points in the Derby standings

1 – Glennrichment – Rudy Rodriguez had entered him to run in the Gotham Stakes but then scratched to run net day, where he proceeded to break maiden. Drew the rail and has the tactical speed to last for a share versus these. 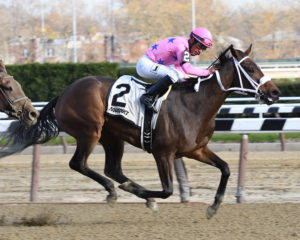 5 – Miss Sky Warrior – did not have an easy time but was still able to win the Grade 2 Davona Dale in her seasonal debut. She already has a victory over this course at this distance when she won the Grade 2 Demoiselle in November. She was further off the pace than usual in her last start but wth return to two turns, I can see or on or close to early pace.

2 – Full House – went straight to stakes company after breaking maiden in gate to wire fashion. She was a bit green but still ran well to be second in the Busher Stakes. She is working well for this spot and a horseman like Jerkens can get the best out of her for this spot

4 – Lockdown – went from maiden winner to winning the Busanda when adding Lasix last out. Freshened up at Payson Park and now returns north for first start since then for Hall of Fame trainer Bill Mott

8 – Tapped – returns to regular dirt after chasing the pace and finishing second in the California Oaks at Golden Gate. In her only career start on regular dirt while going a route, she set the pace before tiring to fourth in the Grade 1 Starlet in race won by Abel Tasman, even money morning line favorite in the Grade 1 Santa Anita Oaks today. 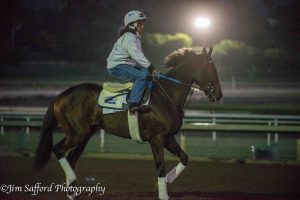 2 – Elate – had a troubled start but finished well to be third as the favorite in the Grade 3 Honeybee at Oaklawn Park. She switches back to José Ortiz, who was aboard for her previous two starts when she stalked the early pace

6 – Daddys Lil Darling – returns to dirt after showing some closing ability in the Grade 3 Florida Oaks. She was second as the favorite in the Grade 2 Golden Rod at Churchill Downs in previous start on dirt. 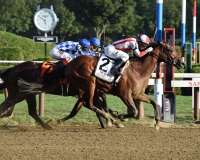 4 – Tapwrit – didn’t have the greatest trip when second McCraken in the Grade 3 Sam F Davis at Tampa Bay two back. But then he put it all together and was an impressive winner of the Grade 2 Tampa Bay Derby as favorite. With the presence of McCraken, he should be an overlay here.

7 – Practical Joke – may have moved too early when he finished second in the Grade 2 Fountain of Youth Stakes when making first start since finishing third in the Grade 1 Breeders’ Cup Juvenile. Has worked well since then and will be flying in the stretch drive

2 – McCraken – after an impressive victory in the Sam F Davis, he was forced to finish the Tampa Bay Derby with a minor ankle injury. Needs to finish at least third in order to earn enough points to get into the Kentucky Derby 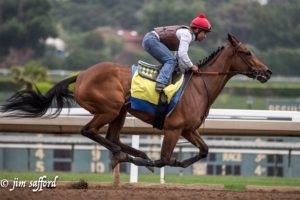 3 – Paradise Woods – makes route and stakes debut after coming off pace to break maiden as the favorite when making second career start. Bred to handle the distance and Hall of Fame trainer Richard Mandella still knows how to get horses ready to peak in a stakes

4 – Abel Tasman – was moved to the Baffert barn after finishing second to Unique Bella in the Grade Santa Ysabel. She has worked very well since then and now gets the services of the hottest jockey in the world, Mike Smith.

1 – Mopotism – gamely came back to win the Islands Fashion Stakes at Sunland Park. She was second to Unique Bella in the Grade 2 Las Virgenes in her previous start

7 – Kimbear – has been training like a monster for dirt route and stakes debut after an impressive maiden victory when returning to dirt. He scratched from the Sunland Derby to await this spot. He should get a solid pace to close into versus these 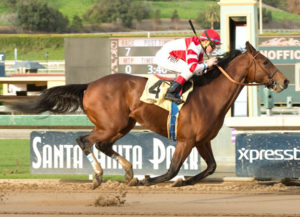 3 – Battle of Midway – from the same connections as Songbird, he comes off a victory versus optional claimers when making route debut. Comes in with an excellent bullet work and will be ridden for the first time by Corey Nakatani

1 – Term of Art – had a troubled start but finished well to be third in the Grade 3 San Felipe. Seven of his eight career starts have been two turn route races so conditioning should not be a pro