The Triple Crown prep season moves into the stretch drive as the first two North American races worth 100 points to the winner will be run Saturday. While the Florida Derby (GI) and Louisiana Derby (GII) may not have the depth for a final Kentucky Derby prep as the expected fields in other Derby prep races over the next couple weeks, both races have late-developing horses that could turn into potential Kentucky Derby factors. 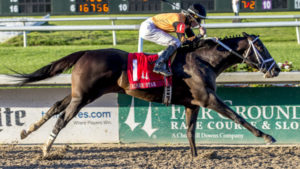 The favorite for this 1 1/8-mile race is Girvin. The Joe Sharp trainee came off the pace to win the Risen Star Stakes (GII) when making his dirt route stakes debut. He was ridden very well that day by Brian Hernandez Jr., who is also the regular rider of McCraken. When Girvin won the Risen Star, the way he did it reminded me a bit of the previous two winners this race, Gun Runner and International Star. He is one of two horses in the race to have a stakes victory in his career, the other one being Guest Suite. He is a deserving 8-5 morning line favorite and I can see him going off at even money or less at post time.

After winning the LeComte Stakes (GIII) in the mud as the favorite, Guest Suite came back to finish fourth in the Risen Star. However, he Neil Howard trainee raced further back than what we were accustomed to in the early stages of the race in both previous starts this year. He is working well coming into this race and he should handle distance, being by Quality Road out of the Ghostzapper mare Guest House (a granddaughter of Broodmare of the Year Weekend Surprise.)

Todd Pletcher brings a couple of lightly raced horses into this race. On paper, Patch looks to be the better of the two horses. He comes off his maiden victory going a one-turn mile at Gulfstream Park in his second career start when making his route debut. He drew the rail for his local and two-turn debut and gets the services of Tyler Gaffalione, who has taken his riding to a new level since switching agents late last year to Matt Muzikar.

Monaco is the other Pletcher entrant. The $1.3 million purchase at OBS March 2016 sale comes off a 12-length maiden victory as the favorite at Tampa Bay. His speed figure is below average and with two lifetime starts as well, looks to be up against it here.

Local Hero is the probable frontrunner of the race. He set the pace before tiring to third in the Risen Star, which was his first start since breaking his maiden. He should set relaxed fractions here, but holding off Girvin but be tough to do again, especially since Sharp entered Hotfoot to be a rabbit for Girvin.

Hollywood Handsome make his stakes debut after closing to third in first start since breaking his maiden. Dallas Stewart trains him and he knows how to get a horse ready to run well at a price. With regular rider Francisco Torres out with injuries, he will need a new jockey here.

Girvin should win the race, but no matter how easy he could win, there will be knocks against him and he probably will go off double digits odds if he makes the gat for the Kentucky Derby.

A field of eleven was entered for South Florida’s last Kentucky Derby prep, but Battalion Runner is expected to scratch before post time. 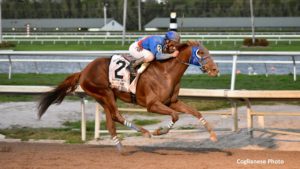 Gunnevera is the 9-5 morning line favorite and is the only horse in the race with graded stakes victories, having won the Delta Jackpot Stakes (GIII) last year and the Fountain of Youth Stakes (GII) last out. His off-the-pace style of racing would normally hinder him in these races, but Javier Castellano did a great job of moving him at the right time in both those victories. But Gunnevera has to prove he can win a race with a regular stretch. The last time he did that was in last summer’s Saratoga Special (GII) versus 2-year-olds. In the Delta Jackpot, the length of stretch of that race is 660 feet. In the Fountain of Youth, since the race ends at the sixteenth pole instead of the regular finish line, the length of the stretch is 565 feet. The 1 1/8-mile distane at Gulfstream means he will have to run 898 feet in the stretch drive, which still doesn’t come close to the Kentucky Derby stretch drive at Churchill Downs of 1,234 feet.

Another negative facing Gunnevera is his post position. He drew post 11 and with the expected scratch of Battalion Runner, he moves inward one stall to post 10. Outside post positions at nine furlongs on the dirt have not fared well. While Big Brown won the 2008 Florida Derby from post 12, we can say Gunnevera doesn’t have the running style or shown us the potential that he can be another Big Brown

The most talked about horse in the race is Always Dreaming. The Todd Pletcher trainee makes his stakes debut after impressive victories in both starts since moving in to the Pletcher barn. He is the only horse in the race with a victory at this distance. Because of a slow pace he led every step of the way last out but he should stalk pacesetting Three Rules today. Pletcher has done very well in this race in the past so he cannot be ignored here.

State of Honor is a very intriguing horse. Three starts back he raced off the pace and made a strong middle move to gain lead before getting caught by Sonic Mule to finish second by head in the Mucho Macho Man Stakes. That race was also his first on conventional dirt. He was sent to Tampa Bay, added blinkers and he set the pace before tiring to third in the Sam F. Davis Stakes (GIII) and then second in the Tampa Bay Derby (GII). He drew the rail here and removes the blinkers and jockey Julien Leparoux should get a good ground-saving trip with him and he will be good value here.

Three Rules is the only other stakes winner in the race, even though that was in restricted races last year. He is expected to be the main pacesetter of the race, but it is questionable he can hang on at this distance. Allegedly his connections are pointing him to the Preakness Stakes (GI) and not the Kentucky Derby.

Impressive Edge is a Dale Romans trainee making his route debut. Two starts back he was fourth in the seven-furlong Swale Stakes (GII) over this track. He then came back to win an optional claimer at seven furlongs and though his breeding says he can handle the distance, can he do it at this class?

Gunnevera has the talent and can win, but he has a lot of questions to answer and at the price, I am not sold. He has to prove it to me.

For full Future Book odds on this year’s Kentucky Derby hopefuls, go to: 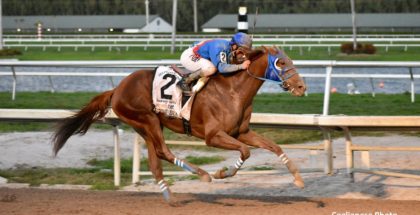