Home » News » Is Shagaf the Real Deal in Gotham at Aqueduct?
No Comments

Is Shagaf the Real Deal in Gotham at Aqueduct?: Shadwell Stable’s Shagaf enters the Gotham Stakes (GIII), scheduled for this Saturday at Aqueduct Racetrack, with a perfect 2 for 2 record. Trained by Chad Brown and scheduled to be ridden by Irad Ortiz Jr., powerful connections and a high-percentage jockey are behind this colt. He needs to improve a bit though, and he can. 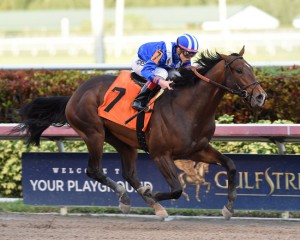 The lightly raced Shagaf has shipped up from 2015 NYRA leading trainer Chad Brown’s winter headquarters in Florida for his much-anticipated stakes debut in the Gotham, what will be the Bernardini colt’s third career race.
Photo: Lauren King, Coglianese/NYRA

As a 50-point Kentucky Derby (GI) qualifier, a Gotham win would clinch a spot in the country’s most prestigious race. With the runner-up earning 20 points, even the second-place horse seems likely to make the gate. Shadwell Stable already owns Mohaymen. With Shagaf, they can potentially run two Derby horses.

Not everyone is familiar with Shagaf. Thankfully, replays of his first two wins exist on calracing.com (type in Shagaf’s name into the search tool for “horse”) and the Gulfstream Park YouTube account.

Admittedly his maiden win, although decent, will not dazzle many observers at first glance. He raced on the rail in the early stages of the one-turn race. Once the field began to clear up front, Shagaf switched to the outside and took dead aim at the two struggling leaders Its All Relevant and Party Barn before pulling clear.

Its All Relevant returned to break his maiden by over eight lengths at Gulfstream Park before running up the track in the Risen Star (GII) at Fair Grounds. The horse who ran second in Its All Relevant’s maiden win, Prove, also disappointed next time out. Those two factors make Shagaf’s maiden win questionable.

Shagaf then ran at Gulfstream Park in a race that featured Rally Cry, one of his Gotham rivals. The race was also a one-turn event. Shagaf started out four-wide and stayed wide throughout the first half, while Rally Cry settled on the rail and tried to move early. The hole failed to pan out, and Shagaf took control on the turn.
Rally Cry was shuffled back and Shagaf began to pull clear again, sort of.

Shagaf took some noticeable right-handed whips and looked a bit tired nearing the finish line. Rally Cry rallied for third place, but the troubled trip will give bettors something to think about. For those who are impressed by hand-ridden victories, neither of Shagaf’s two wins will blow anyone off their seat.

Writing from a positive note, he won those two races and it is difficult to ask more from a horse at this stage of his career. With young horses, speed figures are not stagnant and Shagaf can improve. His best asset from watching the replays is his tactical speed. Shagaf can pass horses while keeping the leaders in sight.

“We’ll have to wait and see where he draws in the race but from what we’ve seen so far he certainly has the ability to adapt to any kind of pace in the race,” trainer Chad Brown said for the Aqueduct Racetrack Notes.

Ironically, Rally Cry drew the outside eighth post this time and must avoid becoming caught wide on the first turn under jockey Junior Alvarado. It is interesting Todd Pletcher sent Rally Cry up north, despite the fact he recently raced at Gulfstream Park and is based at Palm Beach Downs for his workouts.

Shagaf and Rally Cry might be a cut below the top Derby horses right now and needed an easier race to “ease” into higher quality prep races, or, the connections felt the timing for the Gotham was a little more convenient.

The third major contender is Sunny Ridge, winner of the Withers Stakes (GIII) on this racetrack in late January. He contested the lead early on and simply fought until the end, but those who pay attention to raw fractions might knock him down because of how slow they appear at first glance (the half went in 49 seconds).

Sunny Ridge is Holy Bull’s final hope at siring another Derby winner. They nominated him for the Triple Crown, but the connections tend to sound unsure when asked if Sunny Ridge will point towards Churchill Downs.

On a final note, pay attention to Adventist and Mo Power. Adventist ran greenly in the Withers, according to the side comments in the past performances, while Mo Power broke his maiden in a one-mile Gulfstream race.

This year, there are a few potential Bernardini-sired Derby contenders including Shagaf who may show up on the first Saturday of May. It would be Bernardini’s first Derby winner if one of them won. From a handicapper’s standpoint for the Gotham though, Sunny Ridge probably holds the slight edge as the “class” horse. 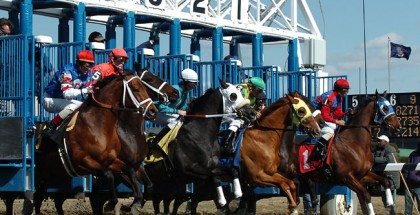 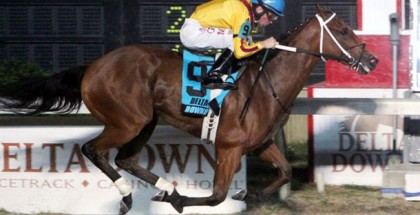