Home » Horses We Love » The Story Of Bet Gold 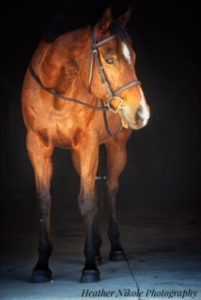 Six years ago, when Kentucky-bred gelding Bet Gold raised his head from grazing in a field with fellow retired thoroughbreds, he could see barbed wire behind the fences surrounding his pasture at Wateree Correctional Facility in Rembert, South Carolina. Today, thanks to the dedication of inmates who cared for him there, along with the love, skill and patience of two South Carolina women, the 18-year-old bay son of Touch Gold is thriving on the show circuit at Carolina Ridge Equestrian Center, only about an hour’s van ride away from where he used to graze.

The story of how he got there begins with trainer Sheli Rose of Gilbert, SC, who first saw Bet Gold (now known as “Better”) in a field at Wateree. Rose has been rehoming thoroughbreds since 1989, when she began working at Thistledown Race Course outside Cleveland, Ohio.

“Thoroughbreds have always been my passion,” Rose said. “I know what kind of life they have at the track and I’m always looking for a good horse.”

One of Rose’s early and most noteworthy adoptees was the stallion Genuine Bidder, a regally bred stakes placed son of Bold Bidder out of a Dr. Fager mare. 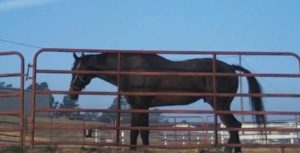 Foaled in 1982, Genuine Bidder sold at the Fasig-Tipton July yearling sale for $350,000, and found his best stride at age four, when he ran third in the Nodouble Handicap at Hawthorne in 1985. In the money six of 12 starts, Genuine Bidder retired to stud in Ohio after fracturing his ankle at age five. Rose acquired him at age 20 when his stud career was over. She moved him to her farm in South Carolina, where she rode him occasionally, and kept him until he died in 2011 at the age of 29.

“He hardly had any teeth when I got him, and he always liked to play dead in the field,” Rose recalled with a smile.

Fast forward to 2012, when Rose learned about the Wateree Second Chances program and their OTTBs available for adoption.

“I was so excited when I found out about Wateree,” Rose remembered. “I knew I’d find some good horses there.”

Rose took a student who wanted to find a horse for herself with her to visit Wateree, and remembers Bet Gold as an instant standout.

“We both liked his frame and personality, and he had a kind eye,” Rose recalled.

In addition to Bet Gold, she adopted two others from the program – Louisiana-bred Siren Sarah and New York-bred Super Ego. 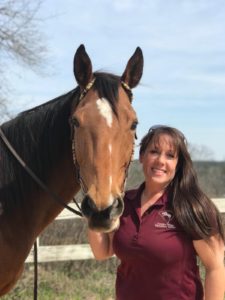 Meanwhile, then University of South Carolina freshman Savannah Fulmer, of Prosperity, SC, was on the lookout for a horse to lease. When Rose told her about an OTTB in her barn, warning her that he hadn’t been ridden in awhile, Fulmer remembered the moment fondly.

“It was love at first sight,” Fulmer recalled. “I saw him at his absolute worst, but that’s what drew me to him. He had so much energy and spunk.”

Rose and Fulmer began working together with Bet Gold on the lunge line and in the round pen before Savannah rode him for the first time.

“It was a daring leap for me,” Savannah said. “Because he was the first thoroughbred I’d ever been on. But once I did it, it was awesome. I really had to re-learn how to ride because of this horse.”

Largely self taught, Fulmer took Rose’s advice on the best way to ride better, including the use of frequent light half halts and refraining from pulling back on the reins.

“You have to ride every step on this horse,” Rose recalls telling her student. “You have to be there.”

Rose says that Fulmer has learned to be a more assertive rider because of her relationship with Bet Gold, but  feels there’s a more important reason the pair has been successful.

“Thoroughbreds want to bond and if they bond with you, you have to commit to their future,” Rose said. “Savannah committed from day one.”

Still, the pair had to overcome a few bumps in the road, especially at Better’s first show after only four months of training together.

“He’d never been to a show grounds before,” Fulmer recalled. “It was a very nerve wracking experience. Even though we were only doing flat classes, he got all excited. I had to do so many circles down the rail in the warm up ring, I came out dizzy. But once he got in the show ring, it was like he knew what he was supposed to do.”

After Better placed fourth in his first class, Fulmer said she knew he was going to make a good show horse. Savannah and Better progressed quickly in the next two years, switching from hunter to jumper classes.

“We both loved it,” Fulmer said. “I’ve never seen a horse more excited to jump. His ears perk every time he sees a jump. We’re both having a lot of fun.” 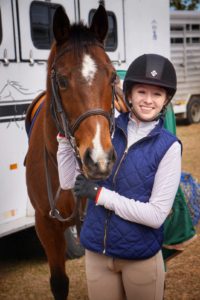 When asked about future goals, Savannah says she’s “pretty happy” with what she and Better have achieved so far.

“He’s given me so much already, I’m thrilled,” Fulmer said.

With college graduation coming up, Fulmer hopes to keep Better regardless, and officially adopted him from TRF this year. What’s her advice to anyone considering adopting an OTTB?

“Do your research, but if you’re thinking about it, go for it,” Fulmer said. “Take time to retrain them slowly, and they will give you one hundred percent.”

Rose agrees, and points out that TRF will take back any OTTB adopted from their program for any reason.

Although Savannah admits she didn’t start out looking for a thoroughbred, her experience with Bet Gold has changed her.

“Thanks to him, I wouldn’t want any horse other than a thoroughbred,” she says.

“I can’t see him with anyone else,” added Rose.

It seems as though the horse who once grazed behind a prison gate at Wateree remains on a golden journey of his own, while those whose lives he’s touched along the way may still find gold dust on their fingertips.

(Coming Next in Part Three: Learn how lifelong equine educator Dr. C. Reid McLellan trains prospective grooms both inside and outside prison walls)

Mary Perdue can be reached at marymrperdue@gmail.com 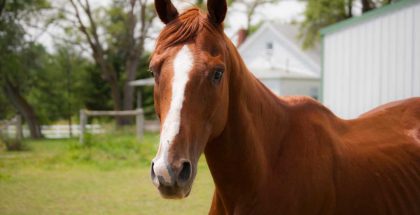