Nine 3-year-old colts competed today, January 18th, at Fair Grounds in the Lecomte Stakes for the $200,000 purse, but only one took the win. Vicar’s in Trouble, in his maiden race, took a major lead as the winner of the 2014 Lecomte Stakes. 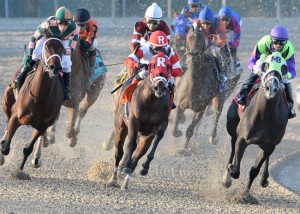 Rosie Napravnik turns for home at the top of the stretch aboard Vicar’s In Trouble, red cap, to win the Grade III Lecomte Stakes for 3-year-olds at Fair Grounds Race Coure and Slots in New Orleans, LA Saturday, January18, 2014. The colt is owned by Kenneth and Sarah Ramsey and trained by Michael Maker.
Photo: Alexander Barkoff Photo / Hodges Photography

Albano finished second in the Lecomte Stakes and Gold Hawk finished third, but Vicar’s in Trouble completely ran away with the race. Vicar’s in Trouble stalked early and easily and then he just took off with a seventh-length win with a fast track time of 1:42.57.

The 2014 Lecomte Stakes is one of the first stakes for 3-year-olds for the season, though it isn’t the official first start to the season, it is a good step towards the 2014 Kentucky Derby. The Lecomte is part of the 2014 Road to the Kentucky Derby point system. The top four finishers of the race receive 10, 4, 2, and 1 points each.

Before the Lecomte Stakes, both Albano and Gold Hawk had good odds and were well-backed, but Vicar’s in Trouble proved himself to be such a huge contender and showed ability beyond the other horses as there was really no match for the 3-year-old son of Into Mischief.

While others may have been surprised, Joe Sharp, Mike Maker’s assistant trainer, who is also jockey Rosie Napravnik’s husband, said of Vicar’s in Trouble, “He’s never given us any reason he wouldn’t go the distance. He’s naturally quick but he is very pliable and has a good brain.”

Vicar’s in Trouble was ridden by jockey Rosie Napravnik, who is no stranger to Fair Grounds. The 3-year-old colt is trained by Michael Maker and owned by Ken and Sarah Ramsey. This was the first graded stakes win for Vicar’s in Trouble.

Vicar’s in Trouble will have to face more races with longer distances and subsequent starts, but he is off to a good start.

Go Bright and Bold for Smarty Jones at Oaklawn