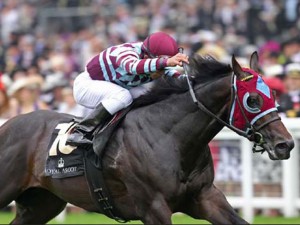 No Nay Never, pictured above at Ascot winning the Norfolk Stakes, is described as a relaxed and intelligent colt. No Nay Never will try for a fourth consecutive win at Gulfstream Park in the Swale Stakes on Saturday, March 1, 2014.

There is something special about the morning line favorite No Nay Never though, who comes in with 2-1 odds for the 2014 Swale Stakes. People want to see the Wesley Ward trained son of Scat Daddy win. Fans are all a buzz on social media sites expressing their excitement to see No Nay Never bring home a fourth consecutive win. There is no doubt that No Nay Never brings the magic to Saturday’s card at Gulfstream Park. Everyone wants to see a champion win, even if you you choose not to bet on him!

David Reid, managing partner at Ice Wine Stable, told us, “This will be just his 4th lifetime start and 1st on dirt. We will see how he handles it.”

David Reid added that No Nay Never has an amazing demeanor to match the colt’s winning streak saying, “He has a great personality. No Nay Never is very relaxed and intelligent.”

The lightly raced well traveled No Nay Never is undefeated after winning three races, most recently the G1 Darley Prix Morny on August 18, 2013 in France where the colt went gate to wire. No Nay Never also won the prestigious Norfolk Stakes at Ascot on June 20, 2013 in record breaking time, and a maiden special weight win at Keeneland on April 26, 2013.

Jockey Javier Castellano will lead No Nay Never across the finish line in the 2014 Swale Stakes from post position #3.

Winning the 2014 Swale Stakes may not be as easy as it seems for the fan-favorite No Nay Never. Experts like 9-5 morning line favorite Havana, who finished 2nd to New Year’s Day in his last career start in the Breeders’ Cup Juvenile at Santa Anita Park on November 2, 2013. The Todd Pletcher trainee Havana will break from post position #1 with jockey John Velazquez.

The 2014 Swale Stakes GII is the 9th race of the day with a post time of 5:10 PM EST immediately before the Palm Beach Stakes.

Ihtimal took the win at the 2014 UAE Oaks Stakes