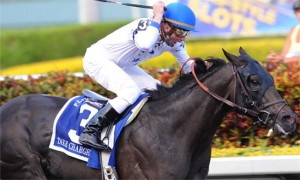 Take Charge Indy and Calvin Borel are looking good for the 2013 Donn Handicap at Gulfstream park.

They say behind every good man is a good woman. Well the same is true for the amazing champion racehorse Take Charge Indy. Maribeth Sandford is the “good woman” behind the success of Take Charge Indy, the four-year-old colt who is preparing for the $500,000 Donn Handicap at Gulfstream Park on February 9, 2013. Reports claim Take Charge Indy looked great at his latest workout.

Take Charge Indy is stabled at Palm Meadows Training Center in Boynton Beach, Fla. Chuck Sandford was on hand for Take Charge Indy’s workout last week and said, “He looks like a million bucks!” He added, “His coat is absolutely shining and he is doing great. He worked great!”

Take Charge Indy became part of Chuck and Maribeth’s lives in a humorous way. Chuck Sandford wanted to retire and Maribeth was a little leery about the idea. Chuck asked Maribeth if they were ever going to retire. Maribeth’s response was, “Not until you get a hobby – I am not babysitting you!”

Maribeth Sandford lives the story of rags to riches. Maribeth founded Bag Makers, Inc. As a single mom trying to support herself and her two children, Maribeth borrowed $10,000 from her father and set up a printing press in a dairy barn in Illinois. The company grew to employ hundreds of people in the United States. Bag Makers, Inc. is a leading supplier of non-woven, paper and plastic bags to the promotional products industry. Maribeth Sandford acted as CEO of the company. Chuck Sandford later joined the team as president.

Soon after deciding to retire, Chuck and Maribeth found themselves in the horse market. Chuck Sandford owned a few Thoroughbreds after returning home from the Army. The couple didn’t purchase their first horse together until 2009. They began with Kildare Cat and Tiz Sensational. Neither of the horses could run a lick and were said to be flops. Along came Take Charge Indy, who changed the course of the Sandford’s luck in the business of horseracing. Chuck Sandford is said to have purchased Take Charge Indy for $80,000, which was money well spent considering the colt’s success! 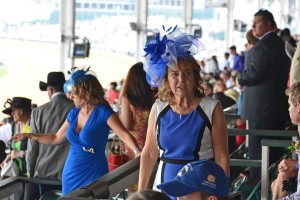 Lady and The Track would like to wish Chuck & Maribeth Sandford, WinStar Farm, the amazing Calvin Borel, and the fabulous Take Charge Indy the best of luck during the Donn Handicap on February 9, 2013 at Gulfstream Park! If you’re a fan of LATT, you’ll know that Take Charge Indy is our all-time favorite!

I’d like to personally thank JB for his kindness and support. ~Trixie

CORRECTION: It was announced this morning (Jan. 12th) that due to Calvin Borel’s wrist fracture, John Velazquez will take the mount atop of Take Charge Indy during the 2013 Donn Handicap at Gulfstream Park.