Is 2014 Ohio Derby winner East Hall an Emerging Star?: When I mention a three-year-old named East Hall, most people would not have the slightest clue who he is. Horse racing fans may not even know. East Hall is a chestnut gelding by Graeme Hall, a relatively young sire. Earlier in the year, you could find East Hall trying to find his way to the Kentucky Derby, which did not happen. He was based at the beautiful Gulfstream Park, but with his running style, could be the easy explanation to why he never reached his true potential. East Hall is one of those horses who like to give connections and fans a heart attack with one late run, waiting until the last moment to drop his head and go. 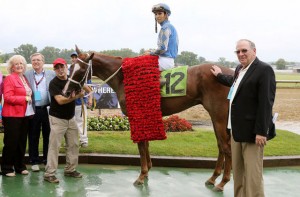 Last night, in the 2014 Ohio Derby at Thistledown, East Hall finally found his stakes win with jockey Juan Leyva. Away from the speed-favoring track of Gulfstream Park, and the lesser competition in the Ohio Derby, East Hall seemed to have gotten a break. He got going a bit late, and barely nabbed Jessica’s Star at the wire. The heart dropping finish may be a sign that East Hall is coming into his own, or he simply needed a break from racing against top-notch fields.

Where will East Hall go next? He has all the time in the world to rest up and show up next in a higher classed field, maybe the Travers. That may be asking a bit much, to step up from the Ohio Derby to the Travers, but the owners know they have a good horse on their hands. East Hall is a gelding, so we will most likely see him return as a four and possibly even five-year-old.