The Breeders’ Cup Sprint is Seemingly Perfect for Palace: The claiming ranks of horse racing is about as low as a horse can go, and the sky is the limit with some of the horses you find making their way through those very ranks. Allowance and Allowance Optional Claiming as higher up in the ranks, but still, they are no where near the prestige of handicaps, stakes, and graded stakes races. 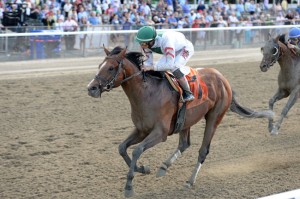 Horses can come from all over. History has shown us that a rags to riches story is usually the best story. This year, as the nation was emerged in the California Chrome fairy tale, one horse was just starting to show his true colors. Palace (City Zip) was just starting to test the graded stakes waters with his trainer Linda Rice. Throughout 2012 and 2013, Palace was racing in and winning allowance races at several different tracks. The first glimpse of graded stake ability shined through when Palace won the grade three Fall Highweight Handicap. In this race, he defeated highly regarded horses like The Lumber Guy and Caixa Electronica. The star in the making would come into the New Year, making it count.

Palace has primarily been based in New York. He has competed at Belmont, Aqueduct, and Saratoga. Palace was not always a grade one horse, and actually, could be considered far from it. When Palace began his racing career, the legendary William Mott trained him. Palace would break his maiden in his fourth start for William Mott, but it would also be his last start for the trainer. After breaking his maiden at Belmont in a Maiden Claiming, by an exhausting eleven lengths, he would change hands. The hands of Linda Rice took over the horse, and slowly, Palace starting winning more and more.

Linda Rice was kind enough to answer some questions over email about Palace for Lady and The Track. When asked about Palace’s claim and what she had thought about the horse, she returned, “When I claimed Palace, I did not see him winning two Grade One races at Saratoga, but who would! I was excited about the claim when he broke his maiden by eleven lengths. I was confident he would win his NY-Bred conditions, and possibly compete in NY-Bred Stakes.”

Palace did not really break onto the graded stakes scene until this year! Only competing in stakes and graded stakes company thus far, Palace has only finished off the board once. He would return to Belmont to win his first grade two in the True North Stakes. Moving right along, Palace was the best of the rest when Clearly Now decided to have a freakish race, finishing about six lengths behind the winner. Palace moved with Linda Rice to Saratoga for the summer, where he won the two grade one races Linda mentions. He would capture the Alfred G. Vanderbilt Handicap and the Forego Stakes, defeating worthy opponents in Falling Sky and Clearly Now.

Lady and The Track wanted to know about the feeling Linda Rice would get when Palace won those two big races, especially the Forego (G1). Linda replied, “It was extremely rewarding. Training horses is a seven-day a week job; there are a lot of disappointments along the way. Winning big races is our ultimate goal and motivation.”

Palace certainly did not disappoint. He is taking Linda Rice to the Breeders’ Cup Sprint, in hopes of a possible Eclipse Award as well. Linda also reported to the Lady and The Track team, “we keep telling him [Palace] he is a star, but he is very humble. I always say he is like Paton Manning, he just does his job.”

Whether Linda Rice is a Broncos fan or a Colts fan is for a later discussion, because right now, Linda has a lot on her plate. Palace is aiming for the Vosburgh (G1), which would be his final Breeders’ Cup prep race. Linda is just hoping no hiccups come along and hinder their trip to California!

Palace is a five-year-old horse, which means he could possibly end up in the breeding shed next year. Not wanting to rush those plans, Rice and her team are “only planning through the Breeders’ Cup Sprint.” With breeding plans, as of now, an afterthought, Palace could possibly return next year. If he stays healthy, he could continue on a new found glory of being one of the best sprinters in the United States.