Home » Derby Culture » Who Are the Top Early Candidates for Kentucky Derby 143?
No Comments

The road to the 2017 Kentucky Derby (GI) has already begun, even though the race is not for another 5 1/2 months. However, the top colts are already starting to emerge and give racing fans a taste of what the potential field could look like. Some of these colts do not even have a stakes win to their credit yet, so they could truly go either way. Right now as the winter racing comes to a close for most young horses, here is the first list of top Kentucky Derby contenders and their current points totals to make the gate on the first Saturday in May. 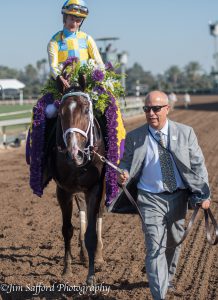 Classic Empire (Pioneerof the Nile – Sambuca Classica, by Cat Thief) – Classic Empire has had some gate issues in his short career, but with the blinkers added after his debacle in the Hopeful Stakes (GI), he returned to the track to win the Breeders’ Futurity (GI) at Keeneland. Following the victory with a win over Not This Time in the Breeders’ Cup Juvenile (GI), Classic Empire looks like the real deal. The colt is bred on the same successful cross that produced American Pharoah and though Classic Empire has a long, long way to go before he can have his name up in lights, he is on the right track and is the early, winter book favorite. (30 points)

McCraken (Ghostzapper – Ivory Empress, by Seeking the Gold) – Trainer Ian Wilkes seems to have a top racehorse on his hands in McCraken, but it’s whether he can get the Derby distance that’s iffy not the talent. Ghostzapper has sired a variety of horses, and if this colt has a percentage of that talent, he’s on the right track. McCraken was last seen keeping a perfect three-for-three record intact in the Kentucky Jockey Club Stakes (GII) at Churchill Downs, clearly showing his affinity for the Louisville oval’s main track, something that can only help him on the first Saturday in May. McCraken is a half-brother to Bondurant (War Front), who is grade 3-placed and a stablemate to McCraken. (10 points) 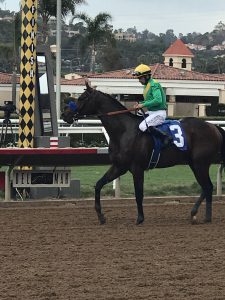 Mastery (Candy Ride – Steady Course, by Old Trieste) – Trainer Bob Baffert had been getting this colt to show some speed in the mornings, ahead of his expected start in the Bob Hope Stakes (GI) and it worked as he turned in an impressive wire-to-wire performance to win his first stakes in just his second start. Mastery has a half-sibling named Clear Sailing (Empire Maker) who is a minor stakes winner. The class this colt has backing him is strong, and his pedigree is even stronger. Candy Ride gets all types of runners, and this colt, according to Baffert, is a top Derby prospect for 2017. The colt is likely go show up next in the Los Alamitos Cash Call Futurity (GI) on December 10. (0 points)

Gunnevera (Dialed In – Unbridled Rage, by Unbridled) – This colt from the first crop by Dialed In is a two-time graded stakes winner at both sprint and middle distances. He first flashed his deadly closing kick to graded stakes victory in the Saratoga Special (GII), winning that day for fun. He finished fifth in the Breeders’ Futurity (GI) in October, and instead of going to the Breeders’ Cup Juvenile, trainer Antonio Sano pointed the colt to the Delta Downs Jackpot (GI), which he won in impressive fashion. Gunnevera did not get a wicked pace to run into, but instead displayed a long, strong and sustained run from the turn all the way to the wire. The colt is likely to go to Florida and point for the Fountain of Youth Stakes at Gulfstream Park next year. (10 points)

Three Rules (Gone Astray – Joy Rules, by Full Mandate) – Three Rules has run six times in his 2-year-old year, with five those races resulting in trips to the winner’s circle with four of those five victories coming in stakes races. Three Rules is a Florida-bred who has taken full advantage of that to race against state-bred competition and his performances show that he appears to be a top colt. However, his first race in open company was the Breeders’ Cup Juvenile where he finished sixth, he finally showed some room for improvement. He is a monster work horse and we all know he is fast, and horses who can carry their speed too turns are always dangerous. If Three Rules can mature into a top 3-year-old, he could pose a real threat. His connections will likely aim him toward the Kentucky Derby preps this winter in Florida.

Hemsworth (Bernardini – In Step, by Unbridled’s Song) – After two fourth-place finishes in tough open maiden company in New York, Hemsworth broke through in the Nashua Stakes (GII) at Aqueduct earlier this month. While the last 3-year-old classic race winner to take the Nashua at age two was Pine Bluff, many other successful horses have won the race. Homsworth has a pedigree worthy of the Kentucky Derby and trainer Tom Albertrani will do his best to get him there. He may stay in New York for the preps there or travel to Florida where his connections spend the winter. (0 points)

Lookin at Lee (Lookin at Lucky – Langara Lass, by Langfuhr) – Trainer Steve Asmussen and jockey Ricardo Santana Jr., who make a formidable duo and win a lot of races together, are at it again with this big colt by Lookin at Lucky. Lookin at Lee has won two of his six starts, but also has finished second two other times. He recently was fourth in the Breeders’ Cup Juvenile at Santa Anita after finishing second to Classic Empire in the Breeders’ Futurity at Keeneland. This colt has the pedigree that will obviously require more distance to showcase and while Lookin at Lucky has not been a phenomenal sire, he has been represented by some talented individuals and this colt is likely to be another one. (10 points)

California Diamond (Harbor the Gold – Carrie’s a Jewel, by Slewdledo) – The Peter Miller trainee has been burning up the track since his debut in June. The colt has been first or second in all of his eight starts this year and was most recently second in the seven furlong Bob Hope Stakes at Del Mar. California Diamond had already won at the distance, but took on a monster in Mastery in his first graded stakes contest to finish a strong second, even after winning four stakes already. (0 points)

Practical Joke (Into Mischief – Halo Humor, by Distorted Humor) – This colt was undefeated going into the Breeders’ Cup Juvenile and while he didn’t remain that way, he was clearly the “best of the rest” after finishing a distant third behind Classic Empire and Not This Time, but easily ahead of his other competitors. The colt has fight in him, which we all want in these young horses, but Practical Joke might have a tough time with anything more than the 1 1/16 miles he was up against in the Breeders’ Cup. Time will tell as we watch the Chad Brown trainee mature. (14 points)

Mo Town (Uncle Mo – Grazie Millie, by Bernardini) – Mo Town was content to sit off the leader Takaful in the Remsen Stakes (GII) before taking command in the stretch to win his first graded stakes. The Remsen is contested at nine furlongs, which means the colt has already ran further than many of his counterparts. The colt was a $200,000 yearling purchase at Keeneland in September 2015 for owners Team D and partners Mrs. John Magnier, Michael Tabor and Derrick Smith. The Anthony Dutrow trainee has won two of his three starts, visiting the winner’s circle in his last two after finishing second in his debut at Saratoga. Dutrow has trained some other talented graded stakes winners, include Grace Hall, Embellish the Lace and The Big Beast so it means something when he says he’s positive that he has not yet seen what the horse is capable of. Mo Town is bred to continue improving with age and distance. Uncle Mo already has a Kentucky Derby winner in Nyquist and Bernardini won a classic in the 2006 Preakness Stakes (GI). (10 points)

Lead Astray (Malibu Moon – Smuggler, by Unbridled) – The Shug McGaughey trainee has raced twice, breaking his maiden in his second start. The colt went 6 1/2 furlongs on the main track at Belmont Park, defeating six others and did so without Lasix, which could be an issue moving forward. Lead Astray is a Phipps homebred with a deep pedigree that was carefully cultivated by the Phipps family. Malibu Moon has already sired a Kentucky Derby winner and with the female family this colt has, which includes Hall of Famer Inside Information (2nd dam), the colt has plenty of stamina in his corner. (0 points)

Gormley (Malibu Moon – Race to Urga, by Bernstein) – In trying to be optimistic about this colt, he looks to be a horse who loves to run judging by his win in the FrontRunner Stakes (GI) at Santa Anita but then finished a lackluster 7th in the Breeders’ Cup Juvenile. Gormley is a big, solid colt who John Shirreffs trains and while the conditioner is not known for his young horses, Gormley is still a promising Kentucky Derby prospect. Malibu Moon has sired multiple top horses, including 2013 Kentucky Derby hero Orb and while Gormley might need some more education to bounce out of the Breeders’ Cup positively, he could easily mature into a top contender for the spring classics. (10 points)

No Dozing (Union Rags – Stay Awake, by Pulpit) – No Dozing won his first two races at Delaware Park and Laurel and then was a troubled fourth in the Breeders’ Futurity at Keeneland. He is bred to love distance and want as much as possible and most recently finished a grinding second in the Remsen (GII) going nine furlongs. He is a big colt who should mature well with age and some further education. (5 points)

Takaful (Bernardini – Sablah, by Distorted Humor) – The Shadwell Stable homebred won at first asking in a 6 ½-furlong maiden special weight at Belmont Park on Oct. 29 and in that debut the son of Bernardini was hustled from the gate and led every step of the way to cruise to victory by a whopping eight lengths, which shows that colt will likely be suited for more ground as it becomes available. Trainer Kieran McLaughlin knows how to get horses ready for the Kentucky Derby, even though he has yet to win the race, and Takaful looks like a promising colt to improve as he matures. (2 points)