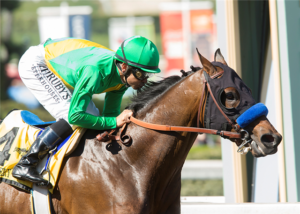 Cheyenne Stables LLC’s Mastery won Saturday’s $400,690 San Felipe Stakes (GII) in impressive wire-to-wire fashion, digging in for a gritty stretch drive after being challenged on the turn for home before drawing away to victory. But the colt’s 6 ¾-length victory was marred when jockey Mike Smith pulled the bay son of Candy Ride up in the gallop-out after feeling something go wrong with what he thought to be in his hind end soon after the wire.

Though the horse seemed fine back at the barn, Baffert later revealed… (more)