The GII San Felipe Stakes takes place Saturday, March 8, 2014 at Santa Anita Park in California. Bob Baffert’s Bayern has been scratched due to a bruised hoof leaving nine Kentucky Derby hopefuls racing the 1 1/16 mile track for a $300,000 purse and 50 points on the Derby Trail. 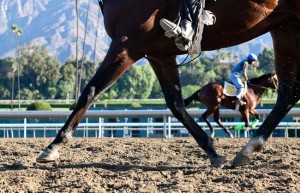 The San Felipe Stakes is the 5th race of the day on Saturday, March 8, 2014 at Santa Anita Park with a post time of 2:00 PM PDT and will award the winner with a $300,000 purse and fifty points on the Kentucky Derby leader board.

Bayern was the 8-5 morning line favorite before being scratched in the 2014 San Felipe Stakes. Trainer Bob Baffert counts on Midnight Hawk, with 4-1 odds, to cross the finish line first with jockey Mike Smith. Midnight Hawk is currently in thirteenth place on the 2014 Kentucky Derby leader board with twelve points. The three-year-old colt is two for three most recently finishing third in the Robert B. Lewis Stakes on February 8, 2014 at Santa Anita Park. Midnight Hawk earned ten of his leader board points by winning the Sham Stakes at Santa Anita Park with regular rider Mike Smith on January 11, 2014. Interestingly enough, Bob Baffert trained both of Midnight Hawk’s parents, champion sprinter Midnight Lute and Miss Wineshine.

California bred California Chrome, with 3-1 morning line odds, is all he rage for the 2014 San Felipe Stakes. I’m no expert, but compared to the other three-year-olds this horse seems heavily raced, or shall I say more experience. The Art Sherman trained colt raced eight times so far throughout his young career and finished first four times. He’s currently on a winning streak finishing first in his last two races. California Chrome doesn’t have any Kentucky Derby leader board points as of yet, but that could all change on Saturday with jockey Victor Espinoza. Experts say California Chrome is a closer doing most of his work on the last turn for home.

The John Sadler trained colt Kristo comes in with 4-1 morning line odds for the 2014 San Felipe Stakes. Kristo is 39th on the 2014 Kentucky Derby leader board with four points total for his 2nd place Sham Stakes win behind Midnight Hawk. The Hronis Racing owned colt hasn’t raced since the Sham Stakes, which to me sets off a siren in a positive way. Jockey Joel Rosario will be on the mount and I wouldn’t be surprised if Kriso brings it home on Saturday in the 2014 San Felipe Stakes.

Schoolofhardrocks comes in with 8-1 morning line odds and teams up with jockey Joe Talamo for the 2014 San Felipe Stakes. The three-year-old colt trained by David Hofmans has only raced once in his lifetime back in August of 2013 at Del Mar and actually won! There really isn’t much to say about this young fellow except I’m very interested in seeing how he plays out on Saturday.

It’s a little dicey but I’m going with Kristo for the win. I’d like to see Mindnight Hawk finish first but the only way that is going to happen is if Bob Baffert finally takes our advice and gets drunk tonight. If anyone sees Bob Baffert out at a bar please let us know so we can bet on Midnight Hawk. I’m going to put money down on Unstoppable Colby to come in the money too. Good Luck! Safe Run!

The 2014 San Felipe Stakes is the 5th race of the day at Santa Anita Park with a post time of 2:00 PM PDT. SEE UPDATED RESULTS