San Pasqual Stakes 2015 Picks and Plays: This weekend we have a couple of nice stakes races at Santa Anita Racetrack including the (GII) San Pasqual Stakes and the (GIII) Sham Stakes set for Saturday, January 10, 2015. With the holidays being over, thank goodness, Sigi and I are ready to go toe-to-toe again at our favorite track in Arcadia, California. 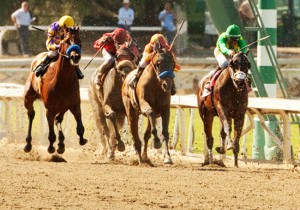 The San Pasqual was first run in 1935, so it’s been around-the-block a few times. It has always been contested at Santa Anita and it has some nice history there. This grade 2 race is for 4 year-olds and up run at the distance of 1 1/16 miles on the dirt for a purse of $200,000.

Up until 1939, the race was for 3 year-olds only and was then changed to the present age group. It has been contested at so many different distances, its mind boggling and was also run on the turf in 1955. Bob Baffert and D. Wayne Lukas both own the most records for wins at 4 each.   The speed record is held by Zappa set in 2008 in 1:39.58. Last year Jerry Hollendorfer won it with Blueskiesnrainbows, who I hope to see get back-on-track soon as this horse hasn’t been the same lately, but that’s another story.

The San Pasqual Stakes is the 8th race of the day on a card 9 with a start time of 4:00 p.m PST and includes race #6 which is the (GIII) Sham Stakes for 3 year-olds working their way down the 2015 Kentucky Derby Trail with 10-4-2-1 points awarded for the top four finishers.

Santa Anita is also offering a special California Chrome “Vox Populi” authograph signing. So if you have the opportunity to head to where the “Turf meets the Surf” it sounds like there will be quite a lot going on.

This is a larger field than I anticipated and quite a salty group. From a wagering perspective, a few of these later races look to be quite juicy so lets take a look at who we like for the 2015 San Pasqual Stakes and our plays.

Kari’s Picks: 2,1,6
Already being a (GI) winner on dirt it’s hard to knock Hoppertunity from the Baffert barn in this race. The son of Any Given Saturday will be making his 4 year-old debut. He most recently won the (GI) Clark Handicap at Churchill on November 28th, second time out, after timeout with a hoof issue garning him highest speed figure to date of 104. He was off for 6 months after winning the (GII) Rebel at Oaklawn March 15th, 2014, then placed in the (G1) Santa Anita Derby behind California Chrome. He was scratched from the 2014 Kentucky Derby. This will be his third race after the layoff. He’s only been off the board twice in his career with a 7:3:2 racing record. He’ll have to chase Big Lover down the stretch, so we’ll see how this pans out.

With the switch to the Drysdale barn, I’ll be taking Bronzo for hitting the board in a big way. This will be his second time racing in his U.S. career. Last out was fourth in the (GI) Breeders’ Cup Mile on Oct. 31st with orignial trainer Jorge Inda, who by the way, had done nothing but a fantastic job with this horse. He’s been training quite well at Santa Anita, stretches out here and should like the added real estate. He gets Gary Stevens in the irons, who is improving off his layoff, at this meet.

Quadrivium gets Smith up and is interesting shipping from the East coast and coming off an allowance win and moving up to a (GI). I try not to leave Graham Motion off a ticket and this guy could bring it Saturday. His last race race November 14th but Motion is at 24% with the 40-60 day time off and I’ll take that. He’s two-for-two in wins since on the East coast after shipping from across the pond. He’s lightly raced with a very nice pedigree so let’s see what this guy has.

*Note: For some reason #8 Mr. Commons going turf to dirt intrigues me here but I’m just going to use under in the exacta.

Sigi’s Picks:
The San Pasqual (GII) over 1 1/16 mile has a full field with some South American horses. Salto del Indio (Chi), Bronzo (Chi), Baccelo (Brz) and Big Cazanova (Arg). The Chilean horses Salto del Indio and Bronzo are in good shape, but they need more ground. Meanwhile, Baccelo is a very good horse, but in my opinion he’s better on the turf. Big Cazanova is in the best shape of his career and this is a race to show what he is made of.

In the San Pasqual, who can follow Big Cazanovas’ steps in the early stages? I don’t think anyone can, so he will try to win again gate-to-wire. He’ll be very tough in 1 1/16 miles and if Hoppertunity wants to win this race, he needs to chase close in Big Cazanovas steps and not let him get away. I think the dirt is not a concern for the Argentinian bred because he ran great races in Argentina in Hipodromo de Palermo on the dirt against excellent runners like Indy Point and Di Giorgio. I’m giving a vote of confidence to Big Cazanova, so I’m use him as a single and placing a win/place bet on him.

Thank you Sigi for taking the time to handicap this race. Best of luck to everyone this weekend. 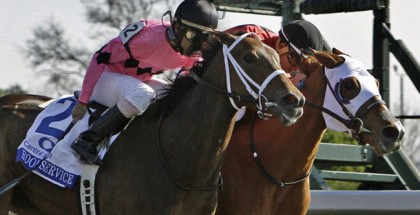