Stallion Feature; The Claiborne Legacy Blame: In recent years, some of the best horses have been considered Wise Dan, Rachel Alexandra, Curlin, Animal Kingdom, Royal Delta, and Zenyatta. The latter went 19 for 20 in her four season career. She was the Eclipse Award winner for Older Female from 2008-2010 and was Horse of the Year in 2010, despite losing her final outing in the 2010 Breeders’ Cup Classic at Churchill Downs by a head to 2010 Older Male Eclipse Award winner, Blame. 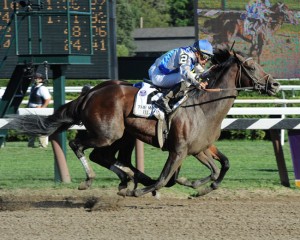 As a racehorse, Blame exceeded his stallion’s reputation, becoming a three-time grade one winner, as well as a winner of multiple other stakes.
Photo: Blame wins the Whitney at Saratoga on August, 07 2010. Photo: Coglianese/NYRA

Since then, both horses have gone their separate ways and retired to the breeding shed. Zenyatta has a three-year-old colt named Cozmic One (Bernardini) and a two-year-old named Ziconic (Tapit). Blame, in 2014, was #12 on the First Crop Sire list and so far I 2015, is #3 on the Second Crop Sire list.

So far, 2015 has been good to Blame, a young stallion standing at Claiborne Farm. For a relatively low fee of $20,000 per live foal, Blame has three stakes places offspring and one graded stakes winner. In the exciting weekend, Far From Over overcame a disastrous start, faced opposite running style than what he was exhibited in his maiden score in his previous start, and defeated a classy colt in El Kabeir, a multiple graded stakes winner.

Blame has been somewhat slow getting a start at stud, unlike Quality Road who was 2014 #1 Freshman Sire. His sales results are huge, averaging $102,857 for weanlings, which is five times his stud fee. Blame’s yearlings average $121,422, six times his stud fee. Finally, his two-year-olds average $209,111, a whopping ten times his stud fee. Breeders are investing time, money, and faith into Blame as a stallion who hopefully lives up to his sire’s, Arch, reputation.

As a racehorse, Blame exceeded his stallion’s reputation, becoming a three-time grade one winner, as well as a winner of multiple other stakes. While Arch was a grade one winner of the Super Derby, Blame exceeded expectations when he won the G1 Whitney over Quality Road, the G1 Stephan Foster over Battle Plane, and the Breeders’ Cup Classic over Zenyatta. He also won the G2 Clark handicap over Misremembered and Einstein. He secured 2010 Older Male Eclipse Award with his 2010 winning season. As a racehorse, Blame never finished worse than third in his thirteen start career.

Blame is out of the multiple stakes placed mare, Liable. While she was never anything special, her sire was a multiple grade one winner. Seeking the Gold was one of the top horses of 1988. While he did not fair well in the Kentucky Derby, won by Winning Colors, he did come back and win the G2 Peter Pan Stakes, G1 Dwyer Stakes, G1 Travers Stakes, and the G1 Super Derby. He finished second in the 1988 Breeders’ Cup Classic behind 1987 Kentucky Derby winner, Alysheba. He came back in 1989 to win an allowance and finish second in the G1 Met Mile before retiring to an astonishing career as a sire.

While Blame offspring are newly turned three-year-olds, he has yet to really make an impact just yet. As young and as promising as the son of Arch is, Blame has a lot of untapped potential. With his son, Far From Over, on the Kentucky Derby trail, Blame can be seen as a sire with potential to be a classic sire.

After The Homestretch Arizona; Reaching Out To Help Horses

Kentucky Derby 2015 Contender Far From Over 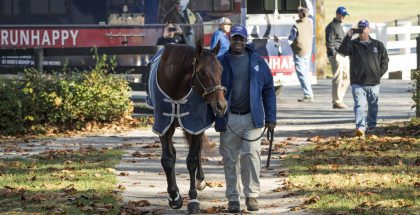