The San Felipe Stakes; Helping Horses Make History: The San Felipe Stakes has been a very important Kentucky Derby springboard that allows runners to return in the Santa Anita Derby (G1) for their final Kentucky Derby prep race. The race was inaugurated in 1935, but due to the First World War, the race was not run from 1942-1944. For the first five runnings (1935-1940), the race was open to colts and geldings ages three-years-old and up. In 1941, the race was limited to three-year-olds colts and geldings, and it was not until 1952 that the race was opened to horses of either gender. 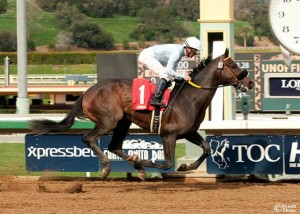 The race has been altered quite a lot in its history, but records have been set by certain important figures in racing that still stand today. Two trainers are tied for the most wins in the San Felipe Stakes: Bob Baffert and Charlie Whittingham both have four wins in the race. Jockey Chris McCarron holds the record for most wins in the race with seven victories. The record time of the San Felipe at its current 1-1/16 mile distance was set in 2005 by Consolidator when he stopped the clock at 1:40.11. California Chrome has been the closest to breaking Consolidator’s record when he got the distance in 1:40.59 in 2014 on his way to winning dual classics later in the spring.

As a Kentucky Derby prep, the San Felipe hasn’t been wholly successful in getting horses across the wire first at Churchill Downs, but there have been some memorable horses who went on to have outstanding careers either in winning Triple Crown races or multiple grades stakes later down the road.

The latest star to win the San Felipe and then further his success is the aforementioned 2014 Horse of the Year and Three-Year-Old Champion Colt California Chrome. California Chrome won the Santa Felipe before extending a win streak that would include the Santa Anita Derby, the Kentucky Derby, and the Preakness Stakes. California Chrome would also win a Grade 1 race on the turf later in the year.

In 2001, Point Given won the San Felipe before moving on to win the Santa Anita Derby, Preakness Stakes, and the Belmont Stakes. Point Given also won the Haskell Invitational and the Travers Stakes, warranting honors as the 2001 Three-Year-Old Champion Colt and Horse of the Year. Point Given was later inducted into the Hall of Fame in 2010.

In 2000, the $4.1 million-dollar yearling Fusaichi Pegasus won the San Felipe, Wood Memorial, and Kentucky Derby before ending his win streak with a second in the Preakness Stakes. He won the Grade 2 Jerome Handicap before retiring to stud in Kentucky.

In 1992, Bertrando won the San Felipe on his way to a second-place finish in the Santa Anita Derby. Bertrando blossomed as a four-year-old, winning the Pacific Classic and Woodward Stakes (G1) and finishing second in multiple other Grade 1 races, including the Strub Stakes, Met Mile, Hollywood Gold Cup, and Breeders’ Cup Classic. At age four, Bertrando was named 1993 Champion Older Horse.

One of the two most prominent winners was Sunday Silence in 1989. He won the San Felipe and the Santa Anita Derby before going on to form one of racing’s greatest rivalries with Easy Goer. Sunday Silence and Easy Goer hooked up in all three Triple Crown races, where Sunday Silence prevailed in two of the three races. The son of Halo also came back to win the Super Derby (G1) and the Breeders’ Cup Classic.

In 1978, the eleventh and most recent Triple Crown winner Affirmed won the San Felipe Stakes. He followed that success with wins in the Santa Anita Derby, Hollywood Derby, Kentucky Derby, Preakness Stakes, Belmont Stakes, and Jim Dandy Stakes and finished second in the Travers. Coming back in 1979, the colt won six Grade 1 events, including the Strub Stakes, Santa Anita Handicap, Hollywood Gold Cup, Woodward Stakes, and the Jockey Club Gold Cup. Affirmed achieved multiple honors as the 1977 Champion Two-Year-Old Colt and 1978 Champion Three-Year-Old Colt and Horse of the Year. In 1979, he was again crowned Horse of the Year and Champion Older Horse. He was also inducted into the Racing Hall of Fame in 1980.

The San Felipe has proven to be a very important race for any three-year-old colt and could assist in forming a ticket to Louisville if one performs well enough.

The race is currently run at Santa Anita Park in Arcadia, California. The horses entering the starting gate will have to travel 1-1/16 miles around the main track before a winner will be crowned at the finish line.

The winner of the Grade 2 San Felipe Stakes will be awarded a set amount of points toward a possible start in the 2015 Kentucky Derby. The winner will receive 50 points, while the following three finishers will receive 20, 10, and 5 points, respectively. This year, the race will be run on Saturday, March 7.

Rachel Alexandra: Royalty on the Racetrack